Day 4
An early start to New Year’s Eve ensured we were on the road swiftly. It was my turn to drive and I was originally slightly apprehensive about the icy conditions. However, I have definitely

never had a more magical drive. Both Dean and James fell asleep as I drove round the windy roads of the Alps. I did not feel entirely safe, particularly as I was continuously advised to attach chains to the wheels because of the ice. The roads became thinner and the edges steeper. Despite the danger it all made for a better view, and I was thoroughly enjoying the drive with a smile on my face. The sight of Mont Blanc was enough to bring out a smirk.

Eventually we arrived at the Mont Blanc tunnel where we entered Italy. At this point Dean took over the driving which gave me a chance to catch up on some sleep.

It took us a while to find our hostel in Milan but once we had we were told that we had arrived in the correct area for a New Year celebration. We had a quick freshen up before heading to the sights of the city, including the spectacular Milan cathedral. Around the central square the locals were alread

y celebrating with street firecrackers which they were clearly aiming at unsuspecting tourists. We were a little bit jumpy.

We had set a target of finding a pizzeria in the centre of Milan. Once we found one we were all a bit excited about what we were going to taste. We ordered a pizza each alongside a Montepulciano. I can safely say that I have never tasted such a beautiful wine. The food was good, but this meal was all about the wine. We concluded that it would be quite pretentious to tell people that the best wine we ever tasted was a Montepulciano in Milan.

It was now approaching time to begin our New Y

ear Celebrations. We returned to the area where our hostel owner suggested was good. However, it seemed that he was either lying or knew as much as we did. Struggling to find anywhere decent to celebrate I saw an opportunity to ask a Chinese person for a bar, using my limited Mandarin. They, as many Chinese famously have (even in this blog), told us that a bar would be forward and on the right. In the end we decided to jump in a taxi. The taxi driver proudly flew the LGBT flag but we didn’t think anything of it until she dropped us off as a gay bar. She must’ve made a presumption that may have been justified…had we been homosexual.

Eventually we arrived at an area with atmosphere. In typically British fashion we found ourselves desperate to get drunk before midnight. It appears that the Italians begin their celebrations at midnight as oppose to our pre-drinking. As a result we found ourselves in a bar (following a stint in a club offering us a 8 shot cocktail destined to destroy us). We ordered a few drinks alongside some family diners. For some rea

sons we ended up celebrating our new year with a Portuguese family who also had the 1am celebration. It was a really nice was to celebrate, but I’m not sure the other diners were all that impressed.

We spent the rest of the night in an extortionately expensive club, but it was New Year. We all had a great night and found it home in one piece and, more importantly, together.

Donald’s in Macao 2 years ago, but it had the same ‘right’ feeling about it.

Once again we couldn’t hang about because we had a journey to make. It was quickly becoming a significant part of our journey to spend a lot of our time driving (as we knew it would be). However, what was surprising was that we were all very keen to drive and enjoying it. A 6 hour journey was not a chore but more of a pleasure.

Half way along our journey we stopped at a service stations for lunch. The Italians don’t seem to do bad food and the paninis we ate at the station out-did anything I had eaten in British services.

When we did arrive in Venice it was early afternoon. We had to park up and get a train the Venice island. We had been told that there was no use buying tickets for the train to Venice as no one checks in the 10 minute journey. Naturally, we got checked and fined by the ticket inspector, albeit only £6.

Upon leaving the train we were greeted with the sight of the Grand Canal in Venice. It seemed very surreal that we were actually in Venice. In fact, I felt at the time that it would 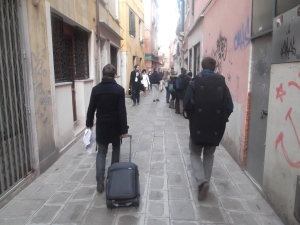 only seem real when we left.

We walked through the streets aiming for our bed. The cobbled streets were beautifully disordered and appeared untouched for centuries. Dean accurately pointed out that it felt like a film set, yet it was real. We all appeared to fall in love with Venice immediately (quite ironic considering that the city is associated with romance).

In fact, we ended up heading out along the canals as night began to arrive. We strived to find a gondola and eventually found one along the Grand Canal. We decided to buy a bottle of red wine to drink whilst we glided through the slim canals of Venice. The three of us were amazed at how incredibly romantic the whole experience would certainly be with a lady. We agreed that Venice’s rep 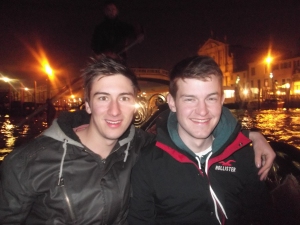 utation was justified. Once again, we had to blink every time we thought about how we had driven from Crawley to Venice. I.e. one extreme to the other.

Following our romantic gondola ride (featuring a blanket) we had built up an appetite. Sticking with our philosophy of eating the food of our region we decided upon the raw ham as a starter and pasta as a main. It was exactly the atmosphere we were looking for, including our moustached waiter. In true Italian style we added a couple of bottles of red wine

to our meal. Lovely.

A quick stop off at a nice bar on our way back to the room ended a lovely afternoon and evening in one of the most fantastic places. We went to bed satisfied and exhausted, with Germany waiting for us in the morning. 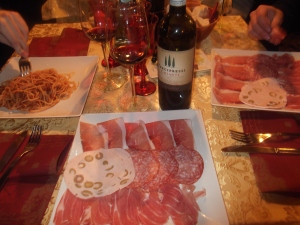 Day 6
We had become more familiar with the unpredictable Venice streets over night and found it back to the train station in quicker time. We had little problem getting a train back (despite me forgetting the name of our destination station).

Once we were on the road it was a case of getting to Germany via Austria (ft. Innsbruck). With Dean at the wheel we were making steady progress until, rather casually, Dean revealed “I think I’m being pulled over”. Indeed he was. We had not quite reached the Autobahn so the 100 mph+ speeds remained a criminal offence. In the next layby the police took all of our passport

s and car details before returning to their car. We had no idea why we had been pulled over but presumed the worst. We made a pact to split the fine 3 ways since any of us could have been pulled. After about 5 minutes one policeman reemerged to tell us that we should stick to km instead of miles but offered us no fine. In comparison to the occasionally arrogant police officers we are used to her (mum excluded) the German authorities appeared level headed.

When we arrived in Munich we were given some advise about what to do by a very helpful lady named Miriam. We headed to the Hofbrauhaus which was apparently the law if you visit Munich. In reflection, it probably should be. We arrived to the sound of hundreds of Bavarian drinkers clinking their beer and a band playing in the background. We found a seat amongst the revellers and were joi

ned by a racist Russian, brothers from Oman and a young German couple. To

gether we drank some brilliant Bavarian beers and noshed on fabulous pork knuckle. We all loved forcefully smashing our glasses together like true Germans.

After the Hofbrauhaus we headed to a couple more bars before heading back home satisfied with our night’s work.