The Baltics: Riga, Latvia – On a Shoestring

I was initially a bit concerned about being judged for going alone in Europe. But, it turns out that lots of people would do, but just don’t have my desire to do so.

When I booked my trips to Latvia and Lithuania I had not considered the expensive euro trip over New Year, an expensive weekend in Cardiff and subsequent 5 week months. As a result, my budget for this trip has been sufficiently reduced, making it all the more challenging.

The flight left Stanstead for Riga at around 6 am. It’s meant a 1:30 wake up for the drive to Essex for my 4:00am park and ride. This made for a little nap at the gate after check in.

The day really got going after the two and a half hour flight to Riga. The pilot informed his passengers of the sub zero temperatures and the likelihood of snow showers. When I stepped off the plane I had a little chuckle as I realised how the pilot had deliberately held back on the extent of the snow storm. Cheeky pilot.

Still, the snow and the crisp frosty air made for a truly Baltic feel in…..the Baltics. As per my online instructions I found the correct public bus (avoiding expensive transport) which got me to the city centre in half an hour for about £1. The only information I could remember about the hostel that I hadn’t even booked was that it was tiger themed and was situated near the main train station. Since I was now in Latvia’s capital city I gathered that this might be a tricky task. However, I decided, equipped with Dean’s soviet looking coat, to pretend to the locals (who didn’t care) that I knew what I was doing. I chose my direction and then chose to put myself down a subway. After choosing an exit at random I found myself outside the train station. Opposite the train station stood the tiger-themed hostel. I had unjustly got lucky despite my lack of preparation. The hostel was relatively empty and remained so throughout the day. I get the impression that Riga isn’t high on most foreigners list of half term getaways.

Once I put tiger print sheets on my bed I had license to explore the city. I had been drawn to the Old Town from when I read about it and made this my mission as I walked around. I had been given a map of the various monuments around the old town and made good time in ticking a few of them off. As I walked around I was vey impressed with the way Riga was exactly how I had romantically imagined it, with the snow adding to the impression it was giving me. The streets were dead aside from a few locals, but certainly no tourists. I walked into a few independent art and craft stores who were more than willing t give me hints and tips on my next location. In fact, they all seemed very eager to show off the city that the were surprised I had chosen to be in. I asked two people fr advice n where to try Latvian beer, both told me their Christian beliefs meant they weren’t able to give good advice on beer. This reflected in the architecture found within the old town.

At certain times on my walk I imagined myself in World War II. It struck me that the people, the buildings and the atmosphere might not have changed much since then. In fact, Riga was exactly the way I wanted it to be.

A nice lady instructed me to visit the ancient Riga market outside of the Old Town. This is 5 large indoor tubes of stalls felling everything from clothing to squid. It gave me an excuse to get in from the cold and have a look at the locals in action. As I walked around I couldn’t resist trying some Latvian cakes, including an apple slice. They certainly have a sweet tooth here. That said, I also ended up buying a pot of honey for home. I don’t know why I bought it expect for it had a few stalls and I convinced myself it was a local delicacy.

I then had the epiphany about deciding what I should do tomorrow. Initially I had wanted to stay in a derelict prison cell but I have been informed that it is too cold to be open to the public this time of year. Instead I decided that I would head slightly north to a national park with a bobsleigh track. I walked to the train stations and booked my onwards travel their and then. I then walked to the bus station and booked by international travel for Lithuania on Wednesday. This means I am sorted for travel for the next couple of days.

When I got back to the hostel I posted a couple of cheeky tweets and had a brief conversation before taking a shower and heading back out again. This time in search of food.

A few people had told me that I cannot leave Riga without eating at Lido. There are a few Lidos in Riga but there is one that is truly special, but it just takes some finding.

I found my way to a stop on the number 7 tram route. Braving the relentless snow I waited for the tram and hopped on. I didn’t pay for the trip and find it hard to believe, given what we say for in England, that it was actually free. Instead I got slightly concerned that we travel,ed a fair distance out if town and their was no sign of Lido. Perhaps 15 minutes after getting in the tram I herd the word ‘Lido’ from the tanoy and jumped off. It was now about 7:30 and very dark. Not only that but I seemed to be the only person for a fair distance and snow had prevented me from distinguishing the path from the road. I was officially in the middle of nowhere and didn’t really know what direction to head in. Once again I gambled and walked in a direction only to concede defeat 5 minutes later and return where I came. I then tried another direction and began to hear music. As I got closer to the noise I was creeping up on a hub of a activity. I had no idea where everyone had come from. The first thing I was was a group of people ice skating around a make-shift rink. Then I began to smell food. This place, in the middle of nowhere, was going to be excellent.

When I eventually found an entrance it did not let me down. I initially went downstairs to the bar where I ordered a 1 litre keg of Latvian beer and sat enjoying the music and the warmth. I then went up stairs where I had the selection of a variety of meats at amazing prices. Despite my hunger I decided to eat what I felt was not readily available at home, hence the pile of sour kraut that ended up sproun all over my plate. It was accompanied by a very cheap pork knuckle, all in all I had a more than decent authentic meal with a large beer for less that a tenner. Lido was rightly recommended, despite its outward location. In fact, I found the food more fulfilling having struggled to find the place in the first place. 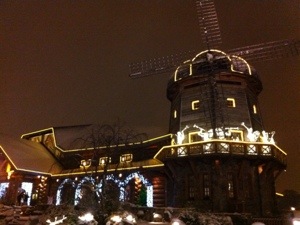 A combination of the warmth, the lack of sleep, and the beer, meant I was dropping off over my empty plate. However, I was determined not to end the night there.

A short walk back to my tram stop ended in an quick arrival of my tram. Once I found a set I dozed off quite dangerously. Yet, I woke up in time for a stop n the old town. I intended to stop off to stop off at a bar that I had been recommended by another local, but it was shut. In fact, Riga does nt seem to be a late night destination, from what I’ve seen anyway. Instead I sat naved my way back (impressing myself) to a bar next to my hostel before taking a Riga brewed beer back to my hostel before awaiting the next day. Riga has been fantastic today. It is certainly unlike anywhere I’ve been before and holds the same authenticity I felt in Venice. I highly recommend it as a trip to see something quite different in Europe.

A little brief return to Guangzhou.