The Baltics: Sigulda, Latvia – Cool Runnings in a Winter Ghosttown

This morning I very nearly snoozed. With no back up alarm this could have been fatal to my onward journey. Luckily I was sharing a dorm with a man, who happened to drool over my British accent, who was also keen to get up and about.

After struggling through a pretty dire shower I was up, packed and ready to rumble. I was then to head to the train station bound for a place I had never heard of until yesterday. I love thinking about how places never even existed in my mind, yet the people who live there have always seen it as the most significant place in their lives (time by myself clearly gets me philosophical). 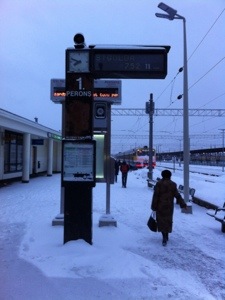 I boarded the snow-caked 7:52 train which would take an hour and cost no more than £2. It was dark and dreary inside but the snow clad landscape outside made or good viewing. 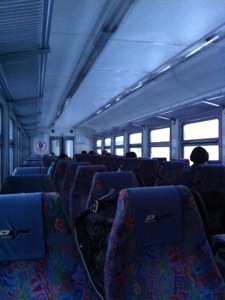 I dozed off a few times during the short journey, safe in the knowledge that Sigulda was the final stop. there were very few people left on the train when I eventually arrived.

As I exited from the train station I noticed the obvious similarities between here and Bourg-Saint-Maurice in the south of France (perhaps because they are both covered in snow). It did seem a lot colder here than the -3 I felt in Riga. It was not yet uncomfortably cold though as I was layered up.

Sigulda is a small town in comparison to Riga and it was not long before I found the hostel I thought I’d booked. When I walked in it seemed quite posh and I was right in thinking it was a bit to classy to be a hostel. The woman behind the counter had been expecting me and informed me that I had booked the dorm in another building a few roads away. She offered to take me by car, which was nice of her (and I found this quite exciting). When we arrived at the hostel I asked her about the other guests. She told me that I would be the only one staying here. Then she gave me the keys to the whole complex as she would not be staying either. Effectively she had given me the keys to a multi-story house for the night with access to a massaging shower. It is clear that tourism isn’t booming in Sigulda during the winter. I must say that most people would probably be put off by the freezing temperatures and continuous snow winds. All the postcards have pictures without snow, which might be a clue. Still, I have been trusted in this lady’s hostel by myself. The first thing I did was break the flush on the toilet.

Before it reached 10 o’clock I decided to head to what was a big attraction to me, the bobsleigh track. It was not far from my hostel and I’ve always wanted to see one. It is unfortunate that I turned up on a day when the 70km bobsleighs were not able to be ridden. It was the first time I had ever thought about riding a bobsleigh. Unfortunately the other option required more people and since there was absolutely no one about (beside a cleaner) I was not able to do the other option (not do I have the £40+ it would cost me). I went up to the start point of the bobsleigh slide and was spooked by the sharpness of the fall. It certainly would get your heart pumping to go down it. In fact, this s the track where the annual world championships are fought. I couldn’t leave the course without sitting in a bobsleigh. I found one outside and climbed in. Fortunately a maintenance man was able to help me take a picture. Where are the locals? Where are the tourists?

The main appeal of Silguda is that it sits right beside a national park. I had decided yesterday that I would do some trekking today. However, I had only packed city-slicker attire for the trip. As a result I ended up trekking 15km through the snow over a 4 hour period wearing Dean’s ‘Jude Law’ coat and my school shoes. Still, I stuck with the challenge.

I carried my map along the route and tried to pass as many places of interest as I could. My ultimate goal was to reach Turaida castle in the next town. Despite the cold and snow, often knee deep, I was really enjoying me walk. In fact, I thought the elegant surroundings had brought a tear to my eye until I realised it was snow. I had a few detours from my mission since the largest cave in the Baltics was slightly off route and I had to see what the fuss of Sigulda’s walking sticks were about (still not sure). Eventually I did reach the castle grounds. Once again I was the only person in sight. In fact, I was a little scared when climbing the main tower of the castle since anyone could have been lurking in there. It could have been the perfect murder, if there is such a thing. Thankfully, no one was hiding in the tower. The view from the top of the tower over the Gauja valley was incredible. The only sound I could hear was wind and snow and I was at the top of a medieval castle all by myself. Had it not been so cold I would have attempted a bit of role play. Maybe I did, no one will ever know. 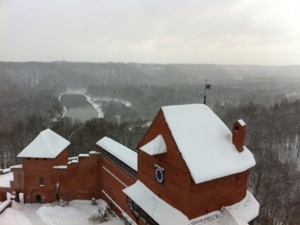 I had succeeded in reaching my target despite the inappropriate clothing I was wearing. I decided that I had earnt some food and a cup of tea, but not until I made it back to Sigulda.

The reward for my walk was a plate of mince and pasta accompanied by a cup of tea. The total cost was about 90p which made it taste even better. I decided it was time to head back to my empty hostel for a freshen up and a nap before my search of food in the evening and a screen for the Arsenal game.

Also, since I was the only person in the hostel, I was given the privilege of using a shower fixed with massage blasters. This had to be taken advantage of! I scolded myself from all directions which put a slight dampener on the multi-blast shower experience. 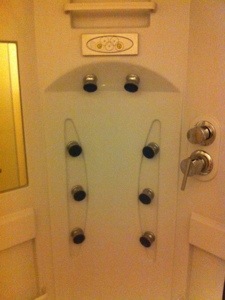 Since I don’t travel without losing anything I needed to buy a toothbrush from the local store before it shut for the evening. Whilst I was there I picked up some Georgian red wine to drink. This was partly because I don’t recall ever trying Georgian wine.

The only two things on my mind, aside from being weary of the snow, were finding a screen for the Arsenal game and eating food. I went to a few places that remained open and asked about watching the football. One place was recommended as a place that might have a tv and might be willing to show sport, it was a small bowling alley. When I got their my polite request for the football was declined in favour of a Latvian basketball match that was happening later in the evening. That was fair enough.

As I had two hours before kick off I set out in search of some food. The only place open was a pizzeria opposite the train station. I was reluctant to walk in as it had no customers (still no sign of people). However, I bit the bullet and ordered a pizza. The staff their were very nice and offered me a beer from their hometown. The pizza cooker lady informed me that the town is swamped with tourists in the summer but they are put off by the cold and snow in the winter. I am still a little surprised by this since the snow adds to the beauty of the national park. Yet, I guess it would also look stunning in green.

Following my meal, and with an hour until kick off, I had nowhere to go but my hostel. Instead I asked if the pizzeria staff needed help cleaning before closing. They were happy for my request but I had to make sure I steered clear of the security cameras as the boss wouldn’t like to see a customer cleaning. In reality I didn’t do much helping and instead sipped away on my delicious Georgian wine.

One more failed attempt to get the football was to walk in to a hidden bar, which looked like a gem. As I walked in everyone turned and stared at me and the barmaid shook her head. Am I that obviously foreign? I still asked about the football but was greeted with grunts from the locals sat around the smoky bar. This was a local bar and I wasn’t welcome. Opps.

Instead I ended up back at the hostel just in time to listen to Arsenal slump to yet another defeat. I was armed with red wine and chocolate….and a radiator.

Sigulda had been very good to me today. I do feel as though I may have taken Todd time to a new extreme, but I don’t think I would have appreciated the area as much had I had company (I certainly wouldn’t have walked so far). I think Sigulda has a lot to offer and, for different reasons to Riga, would recommend it to any visitors to Latvia.