The Baltics: Kaunas, Lithuania – Stodgy Potato and Some Chilly Steeples.

A night in a lovely bed with chocolate and red wine could only have been bettered with some female company. But a man can’t have everything.

I avoided the blast shower today and went for the more familiar, normal shower. I then swiftly packed my bags, dropped my keys off where I had agreed and made for the train station. Naturally I picked up a salami wrap on the way. 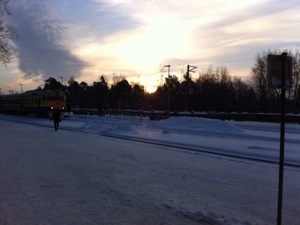 As I did yesterday morning I got on an early train and slept for most of the journey. This time it was a return to Riga in order to catch my international coach to Kaunas. In fact, today has consisted of a lot of travelling (which has given me the opportunity to catch up on this).

When I arrived back in Riga several signs pointed out that the chill factor had increased to -8 degrees…so pretty cosy then. This might explain my consistent desire to cover my ears with my hood. 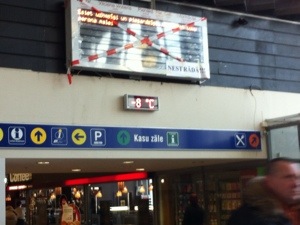 In my half hour wait I perched up for a tea and a savoury snack before boarding my coach.

The coach I had booked with was an Ecolines coach bound for Bonn, which seemed like a mammoth journey (Bonn being closer to London than Riga). I had to make sure I didn’t miss my stop or I’d end up in Poland or Germany.

During the journey an old Russian lady attempted to befriend me. She initiated conversation, in German, by complimenting me on my youthful looks and presenting genuine shock when I told her my real age. At this point I was holding my own in my GCSE German. However, as she proceeded to tell me her life story I was not following. Instead I was translating her words in my head to what I wanted them to be. In my version if her life she had 2 children in Moscow but she had met a young German man on the Internet who promised her partnership in his family’s Schnitzel business. She was fleeing via Lithuania to put her former lesbian lover, who may be following her, off scent. Of course this is just a prediction. 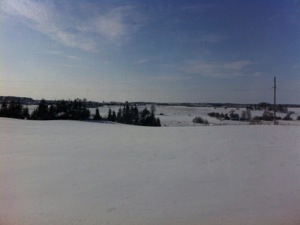 Other than that there was nothing spectacular about the journey apart from the beautiful flat landscape covered in snow. This didn’t change as we entered Lithuania. I was quite excited about what differences the differences might be between Latvia and Lithuania in landscape, people, and most importantly….food.

Upon arrival in Kaunas I quickly found the bus stop indicated by the hostel website. Within a couple of minutes I was on the public bus. I have become accustomed to sitting on the pedestrian side of the road in order to look at the name of each bus stop. This was particularly helpful today as a name was all I had to go on.

Within 10 minutes of leaving the bus stop I had alighted and arrived at my hostel. The City Hostel, Kaunas, is slightly hidden through an icy walkway. However, I received a fantastically warm welcome when I arrived and the owner was happy to offer me a heater to wam myself up before I went out and got cold again. He informed me that I would be likely to share the 8 bed dorm with no other people…no surprise there then. Later on, however, a Russian man from Kalingrad was to join me.

I wanted to explore the old own in Kaunas before it got too dark. Armed with a map I set out for the town square. I couldn’t help but admire the people in fur coats walking down the streets scattered with part Russian, part German architecture. The few photos I was able to bring myself to take didn’t really capture the mood. 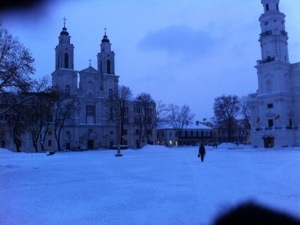 Despite the uniqueness of the city I really began to feel the cold. It was about -8 at this point but the wind and light snow made the cold bone-chilling. Still, I had a few landmarks to see, not least the Kaunas castle. Once again it seemed I was the only tourist mad enough to go to Lithuania in February. 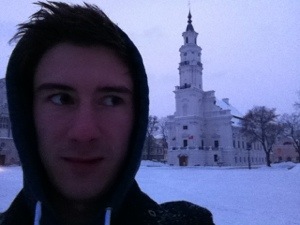 I had only eaten a snickers since breakfast so I stopped off for some dinner at a traditional Lithuanian restaurant recommended by my hostel owner. He told me that I cannot come to Lithuania without trying Cepelinai, the country’s national dish. After some help from the waitress I sat with my Cepelinai and a glass of Lithuanian beer. The food was made up of potato stuffed with pork meat coated in a fatty sauce (which may have just been fat). It tasted wonderful and I had some stodgy bread to fill any gaps left in my stomach. It certainly tasted more appealing than it looked….like a fatty Baozi. 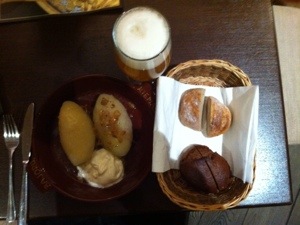 It was now approaching 8 and I was flagging. I walked back to the hostel and could easily have passed out. However, the hostel owner invited me o join him in watching the Champions League. I had Italy forgotten about that. I wanted to take him up on his offer but I first decided o brave the dropping temperatures to experience a Lithuanian bar. He told me his favourite so I headed there. I sat and enjoyed the first half with a couple of beers and struck up a brief conversation with a man at the bar. He turned out to be a horrible man, effectively bullying and ordering the bar maid about. I have always had good things to say about people from Finland, but he tarnished that. It made me feel quite uncomfortable and I ended up being overly polite in an attempt, in my mind, to even things up. I didn’t stay for the second half as I wanted to see what the hostel man had to offer. 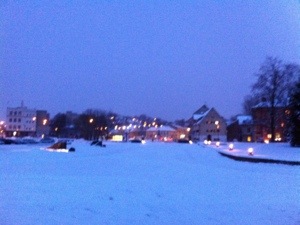 He had tea! Tea when you step in from the cold is lovely. As is sitting in a random Lithuanian place watching Football on the top of a fridge. Proper stuff. 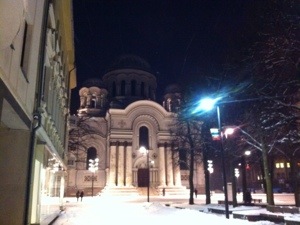 When the game ended I made a quick dash to bed where I was asleep before my head hit the pillow. It was a short experience in Kaunas, but an enjoyable one.