The Baltics: Vilnius, Lithuania – For When One Church Just Isn’t Enough.

Today kicked off with a shock. And no, it wasn’t the Russian eating toast. It was the temperature recorded outside. -10 with the potential for -12. Was I really up for that? Pah.

The hostel owner (who remains nameless, quite wrongly) had put on a continental spread for breakfast. I went for the salami and cheese on toast combination.

Soon after I was on my way to the bus station. I decided to walk on the other side of the bus route I took to get there. Since tit was a one way street I was unlucky to come across a bus going my direction. It seemed I had turned on my sense of direction the previous morning as within 20 minutes of leaving the hostel on foot I had arrived at the bus terminal, mapless. I was smug to myself about this achievement.

The short bus trip to Vilnius was swift and easy. I haven’t been unfortunate enough to encounter traffic on this trip, so all journeys have been in time.

I had done no research into Vilnius or what to do once I arrived. The dreary little bus station I was dropped off at didn’t fill me with confidence for the day ahead. However, a sneak peak at a guide book in one of the shops told me exactly what to do: go out and turn left.

That is exactly what I did and within minutes I was in the old town of the city. Much like Kaunas, Vilnius is glittered with superb churches in all shapes and sizes. Churches don’t usually do it for me but I tried to make this an exception. 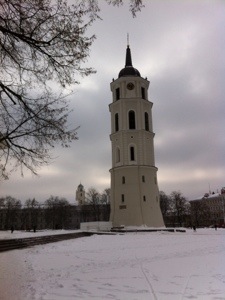 As I walked around, with the weather more bare able than yesterday, I enjoyed the atmosphere of the town (probably because there was a few people about). I took a few pictures of the beautiful buildings before I found the Vilnius Art Gallery. I went in for a good look around, and there was a special feature on a local artist. Once again I didn’t really know what I was doing or looking for, but I made a conscious effort to make the other people in the building think that I did. This meant a lot of chin scratching and squinting my eyes as I got close to paintings. I hope they all thought I am very cultured. 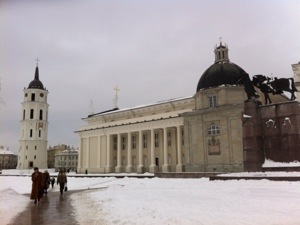 After that I made sure I visited the cathedral and castle remains before finding some food. Since I had ticked off one of the national dishes yesterday it was not time to try the other one. I get that the best place to do this was at a restaurant selling ‘Lithuanian food’. Straight away I ordered kugelis from a waitress named Barbora. I added another Lithuanian beer to my order. It was a swift service which left me a little underprepared. This dish was effectively a potato pie with hidden chicken legs inside. Although it tasted nice I felt as though very little effort had been made by the chef. Perhaps I expect too much for £2.50.

Full on local food I was ready for round 2 of exploring. I aimed towards the Vilnius dungeons, which supposedly housed mummified bodies. When I arrived at the street it appeared that my tour app had lied to me. I asked a nice lady in the pub opposite where I might find the dungeons but she had never heard of it. Instead she quipped that I should go to London if I wanted dungeons. I trumped her quip by informing her that the London Dungeons are currently closed for refurbishments. Winner.

Actually, this lady made me feel so welcome that I decided to try a different beer before moving on. She was keen to speak in English and told me about her desire to complete her masters degree in England. She also told me that my next destination, the Genocide Museum, came highly recommended.

Off I popped on the longish walk to the museum via the presidential palace. As I walked nonchalantly outside I was peeped by an entourage of police cars surrounding a black car carrying the Italian flag. I can only guess that someone important from Italy was in Vilnius today, and a clueless British man got in his way. 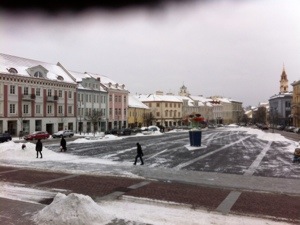 Eventually I did arrive at the museum and I was immediately taken aback by the impact it had on me. It reminded me of the war museum in Vietnam in that it featured atrocities that are still being felt in the country. The museum gave lots of information about how people were oppressed during Soviet rule and gave detailed accounts of life in Gulags as well as what it was like to live in Lithuania as a communist. I found it all very interesting, particularly as I felt quite ignorant towards Lithuania as a country before arriving, having no regard for its history.

Perhaps the most shocking parts of the museum was the prison that has remained in tact. It was a prison used by the KGB right up until the fall of the Soviet Union. The shocking conditions if the cells, solitary confinement and the torturous stories it told made it even more fascinating. 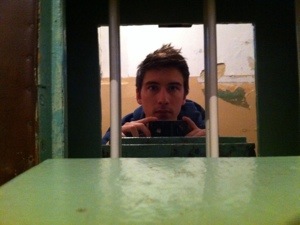 I must admit that I became a little bit scared when I ended up in the execution chamber alone. Creaky doors and knowledge of hundreds of death in the same room did not sit well with my stomach. The whole experience in the museum was fantastic. I would even argue that it warranted the visit to Vilnius alone.

Following 2 hours in the museum (I’m not sure I needed to read every word) it was approaching time to get a bus to the airport. First I wanted to eat goulash since it is one of my favourite dishes. However, in the short time I had left I couldn’t find any. I am sure Vilnius has goulash though. Instead I went for my old favourite…street food. I always love a good and cheap bit of street food.

I picked up the bag that I left in hold at the bus station and got on the 7pm bus to the airport where I had a two hour wait before boarding.

And that’s where my brief Baltic adventure ends. 4 very different places in 4 days. 4 very eventful days. Who knows where I’ll be off to next, but I think I might take someone with me.