On the Tuesday we were thinking about a weekend in Ghana, but by Friday we were reflecting on a memorable 3 days in Bruges, Amsterdam, and Antwerp. A standard Bank Holiday Weekend.

n the Saturday morning meant we were at Dover bright and early for our ferry crossing. Just as myself and Ross had done at the end of last year we intended to arrive in Bruges for lunch. With no hic-ups on the way we reached our first target in no time. Unlike our last visit to Bruges we did not have any Belgian waffles or climb the Belfry, but instead dabbled in chocolate and tucked into a lovely meal in the market square. Naturally we added some beautiful Belgian beer to the mix.

Following our short stop we wer

e back on the road and bound for Amsterdam. I was a little apprehensive about the Hostel, as I had booked it. I had not previously travelled with Kate, Helen, or Ross so I didn’t want to introduce them to something that would make them feel uncomfortable. However, the hostel offered us a room with 2 bunk-beds and a private toilet. Thankfully everyone was happy about that.

By the time we had arrived and freshened up it was approaching dinner time, and there were some tummy’s rumbling. On the back of my last visit I suggested one of the copious amounts of Argentina Steak Houses in the Red Light District. I was incredibly excited to see Ross’ reaction to the ‘ladies’ in the windows.

After a meat filled dinner I had that opportunity. We had a few glances in the window and Ross’ reaction was reminiscent of Dean’s back in January….disgust. That, like Dean’s, was short-lived.

We decided to make a night of it by heading to a few bars in the Red Light District before joining the people of Rembrandplein for a few more drinks. The night ended earlier than expected because we over-indulged in our excitement.

The following morning we w 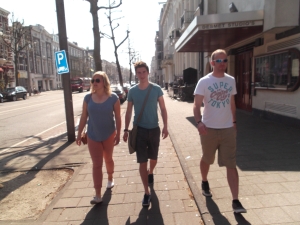 oke up with rather dry throats, and I woke up on a whole pizza. Am I getting too old for this?

We decided to hire bikes for the day and explore more of the city. I had done so on my first visit to Amsterdam but still felt unfamiliar wit

h it. Those who read this regularly will know that I want (need) to have my bearings in a place quite quickly. On my third trip to Amsterdam I still felt like a novice. But I felt like i picked it up quite quickly this time.

Once we found our hire-bikes we set off towards the Heineken museum. Helen had suggested we visit there and since none of us had before we did not offer any other suggestions. It turned out to be a good few hours. Not only did we get to see how the beer was made and learn about the history from a man that the girls found dashing, but we also got ‘free’ tasters. Myself and Ross decided to use one of these tasters to become ‘Certified Pourers’ of Heineken. I’d do anything for a certificate. Fortunately the man who awarded us didn’t take one of our tasters away, so we still had 2 pints to devour in the free bar. Meanwhile the girls were flirting with an English man they found, rather successfully. Kate was a

wing man in this situation.

The Heineken experience was a success and we all left slightly tipsy on our cycle back towards the centre. This time we stopped for lunch in a traditional Dutch bar to have a snack whilst Helen caught up with an old friend.
We then decided to go for a free cycle around the city. In doing so we spotted some gems whilst we let the beer wear off a little. I made it my mission to find my way back to the cycle hire store and was quietly smug (a trait I need to stop) about fin 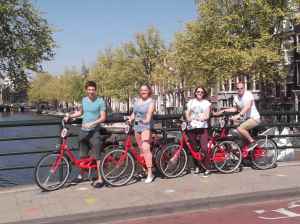 iding my way back with ease.

Once again we were reluctant to stop for two long so walked back to our hostel and got changed before heading back out again. This time we ate in the restaurant beside the Centraal Hostel despite it being empty. Is eating in an empty restaurant ever a good idea? We survived to tell the tale.

With our bearings sorted and the mild temperature of the night we decided to walk back towards the Rembrandplein for a few drinks. On route we were able to cross the beautifully lit Amstel River and take in some of the romance in a city that is wrongly associated with sleaze.

When we arrived we were lucky en 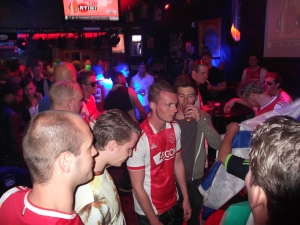 ough to spend the night partying with the Ajax fans who were celebrating winning the league earlier in the day. They were particularly keen on earing sunglasses in bars. Maybe their eyes would tell us something they don’t want others to know?

Luckily for Helen the English man from the Heineken museum was not far away. Luckily for the rest of us, the music was good and people were in high spirits. This healthy concoction meant that the night lasted longer than the previous one.

Myself and Ross went home separately to Helen and Kate. We decided to walk, I’m pretty sure the girls didn’t. Nonetheless, we were all home safe.

A double-header meant our heads weren’t quite in the state required for a long trip home. However, the thought of stopping off in Antwerp got me excited. I have always been excited by Antwerp. I don’t know why, perhaps its the name, perhaps i

ts the enigma of it.

We arrived in a very quiet area of Antwerp with European teenagers playing cards in the sun. We were a little concerned with the old woman who couldn’t take her eyes off of Kate. We concluded that she put a spell in her.

We had a lovely lunch including a currywurst before getting back on the road bound for Calais. Ros

s had therefore succeeded in his own mission to drive to Amsterdam and back. Credit where credit is due.