A year at school has culminated in a new adventure. An adventure that began as a hypothetical idea and materialised due to Azerbaijan’s exceptional performance at Eurovision. However, it is now a reality, and Hungary is our first stop on our mission towards the Caspian Sea.

Despite being unable to respond to endless questions relating to my summer (most beginning with ‘why’) I was now faced with my own dilemma: how?
Yet, as many of you will already know, I have come to rely on luck to get me to places and firmly believe that we will arrive safely in Azerbaijan with nothing but a few amusing glitches on the way. On this trip I am accompanied by Fletch, a school friend from Torquay with a summer to fill. Does he know what he’s in for?

Our first challenge became clear before we left Crawley for Gatwick. In getting the cheapest possible transport to Stansted I had booked two separate buses to get us there during the middle of the night. However, one was due to drop us off south of the Thames, and the other pick us up 8 miles away. This was too great a distance for us to cover in a short time with backpacks. Still, neither of us seemed to panic, which gave me the same impression of Fletch as I got of James when we broke down in Belgium: both optimistic and pragmatic.

It turned out that when we arrived in London a very kind driver offered to take us to our pick up point for the next leg of our journey to the airport. We considered this to be our first hitch, and it genuinely was.

As a result we turned up at the airport just the 5 hours prior to our 8am flight. This gave us the opportunity to get our sleeping bags out and camp ourselves on the stone flooring. Since it took me longer to nod off than Fletch I was subjected to my first bout of ‘sleep-envy’ on the trip – where you wish you could sleep as well as someone else. I did manage to get a couple of hours sleep before being run over by an inconsiderate woman with a suitcase trolley. I managed to crawl away like a wounded caterpillar to the safety of the cash point in the corner of the ‘zone’.

We did eventually make it onto the plane for ‘yet another on-time Ryanair flight’.

Upon arrival we quickly jumped on the 200E public bus to the nearest metro stop, about 15 minutes from the airport. Here we got the metro close to the hostel where we managed to check in and freshen up before exploring the city in the 40 degree sun.

The city itself is beautiful, and we spent much of the day wondering around it. As we walked around much of Pest, and some of Buda on the other side of the river, we viewed many of the sights in every tourists handbook. However, the despite there being numerous places of interest in Budapest, the true appeal of the city comes in its food, drink, and nightlife. We were to find that out as the night progressed.

We returned to the hostel Goodmo for a few beers on the ‘party terrace’. The heat was relentless even into the early evening. We managed to have a cold shower before deciding on where to go for some Hungarian food, goulash being the obvious choice.

We were recommended a traditional restaurant close to the Jewish Quarter called Frici Papa’s. a Hungarian girl revealed that it was her favourite place to eat with her friends. We were satisfied with that review and were not left disappointed with our goulash. The only downer on the meal were two children who laughed at our failure to communicate effectively with our waiter. Lovely food!

Despite our lack of sleep, we decided to explore the ruin bars of the Jewish Quarter. They really are something special. The night was still humid and people were drinking outside in their masses. Budapest is a brilliant place t have a beer.

We went into a bar called Szimpla Kert, a ruined bar recommended to us by research. It didn’t look much from the outside but had a vibrant atmosphere on its innards, topped with some traditional live music. It was one of those great places where people share tables if there isn’t enough seats. We ended up with 2 German girls who had been in Budapest a while. They questioned whether we were ‘like the people on Geordie Shore’. At first this was insulting. And then I realised that people away from Britain are able to tar us all with the Geordie Shore brush. Is this what Britain has become? We were quick to quash these ideas, but I still think they questioned our motives.

We ended up back at the hostel before 12 and had a pint there. We decided to save ourselves for the next days and went to the sticky, non-air-coned room. It wasn’t long before I decided I wasn’t ready for bed which meant I spent the next 3 hours on the terrace with 3 opinionated Australians, 2 Italians who loved parmesan and 2 Americans who were….American. At 3am it dawned on me that Fletch had already had 3 hours sleep…giving me greater sleep envy than before.

The anticipated storm did not clear the humidity which meant we woke the next morning. After cooling in the shower we set out towards the Heroes Square and ultimately the famous thermal baths of Budapest. We took an unconventional route as I tested myself with my bearings (habitually). It was a nice place and the thermal baths did look appealing, but were a little steep for our budget. Instead, we went to visit Parliament and sunbathed by the Danube. Lovely.

We found another delicacy, langos, which is basically deep fried bread covered in cheese and garlic. It tasted far better than the description though. We then had a beer in the sun before a small gust of wind blew Fletch to the ground with a thump. His beer was unaffected. Before evading back to prepare for the evening we decided a visit to Budapest would not be complete without a Jewish tour of the city. We teamed up with a group of Israelis and Americans to learn about the history of the Jewish people in Budapest. It was actually really interesting, especially as the guide kept making slightly anti-Semitic jokes: “but it’s ok because my grandmother was a Jew’. We called it a day before the d of the tour though.

The evening started in a busy square in Budapest. We initially latched onto a group of Australian gap year students who, inevitably, lead us back to Szimpla. Here I noticed a man with an expression I immediately empathised with. He was a lone traveller with a beer but no one to share conversation with. For this reason we began to talk to him. He was Swedish. He joined myself and Fletch for the rest of the night as we recruited Hayley, Nell, and Dan from our hostel. It turned out to be another brilliant night in the ruin bars. Szimpla is simply a joy, hence being voted the 3rd best bar in the world. It has a traditional charm but goes back so deep that it as scores of rooms with their own unique identities, drinks, and music. Highly recommended.

We eventually hit the sweat fest of a room again in anticipation for our first day of hitching. 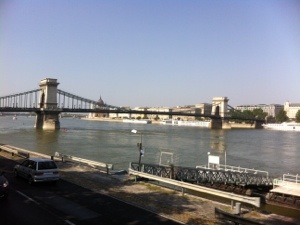 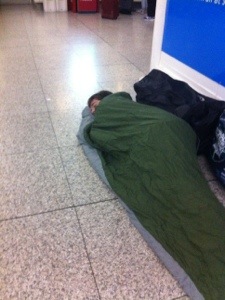 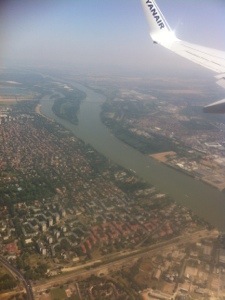