Our mission to Belgrade took us the best part of 2 full days, and it really does warrant post to itself because a few strange things happened on our route.

We left Budapest via the metro and a public bus, which lead us to the very edge of the city, beside a motorway. From here we put out our thumbs for the first time in addition to our cardboard sign reading Szegad, the border town for Serbia. We were initially concerned about the fast speed of traffic heading towards us since it did not give drivers much of a chance to pull over. Still, within 15 minutes we had our first hitch. 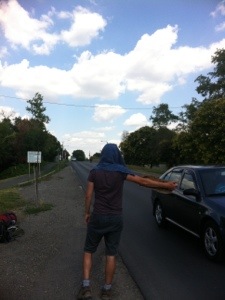 The man who picked us up for the 100km drive was a middle aged Hungarian man on his way to visit his mother. His name was Norbert. Much like what had been said on Internet forums, he was happy to share his own travel stories from his younger years. We got the impression that people in his family are bored of hearing it, we certainly were not. In fact, he had led a very interesting life before he, and I quote, became “caged by wife and children”.

He recommended his favourite restaurant in Szegad for lunch. However, were decided against it, and went for something a little cheaper. 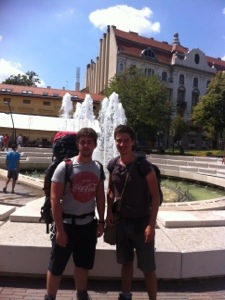 For the next stage in our journey we optimistically signing for Belgrade. After an hour we changed our sign to ‘Serbia’, in this heat anything would do. We stood in the sweltering 35+ heat for over an hour before an old man picked us up in his van. He agreed to take us to the border but also decided to take us on a detour beforehand. He spoke broken German, which helped us a little, but we we still confused as to why he left he vehicle at a building named ‘Hotel Agro’ to come out with 2 rather intimidating men whilst we melted in his van.

Eventually we managed to cross the border to Serbia, via a hefty queue at the border due to Eu regulations. Our hitch was not going much further than the border so he dropped us at the first petrol garage. At this point I was quite pleased as it meant we could hitch from the motorway. However, after 5 minutes trying to find a new vehicle the police came and told us off. I don’t think we should be becoming a nuisance to Serbian police. Still, it took another telling off before we decided not to get an involuntary ride in a police car.

Instead we asked for lifts in the garage. Instead of getting a lift we ended up giving a group of Muslims directions to Mecca so that they could pray, and getting a Pain-Au-chocolat in return. We had no luck with lifts.

Faced with the prospect of camping in a petrol garage I posed the possibility of walking along the hard shoulder of the motorway until we met civilisation. Fletch, quite rightly, didn’t agree with this very much, but we did it anyway. We walked about 5km along the motorway hoping that no one would kill us before reaching an exit. We walked along the exit before approaching a quite village. T which point we were content to camp the night out with the little water we had remaining.

As always, fate deals good things. 2 men were walking in the opposite directions. They looked slightly intimidating, in a Serbian kind of way. Both looked like they had one a fight or two in their time. We tried not to be intimidated as we asked them for directions to an ATM. However, after a short conversation they suggested that we join them on the bus to Subotica, and they would cover the cost. First impressions aren’t always correct.

They very kindly got us to the first major town in Serbia where they led us to a traditional restaurant for some much needed food. During our dinner conversation they suggested that we could stay at one of their girlfriend’s apartments over night. After a couple of beers this turned into an invitation to a hardcore punk gig, which was accepted. This resulted in getting a shower in a 5th floor apartment before the night escalated into sitting on beer crates in Serbian backstreets with tattooed and toothless skin heads. We were now in Serbia!

At around 11pm we got a lift to a local bar where the punk band were about to start. I hope we didn’t seem out of place without a skin head or a mowhork but we were so overwhelmed with how Serbian our night had become. The heavy punk screaming and shouting was just the kind of thing I’d never experience in England. We would not have experienced this real side of the country had we not hitch-hiked. It made the whole thing worthwhile.

Still, at around 2am, back outside on the beer crates, my body gave up and told me it was knackered. This resulted in us passed out on a sofa bed in the girlfriends apartment before our 7am start. We were so thankful to the gents that helped us out. Very kind men.

Our next stop was between Belgrade and Subotica in Novi Sad. Here we managed to refresh ourselves with much needed food and reflect on what actually happened the night before. We were still wearing the same clothes we had spent the last 24 hours sweating in. Not a pretty smell.

From Novi Sad we took a public bus to the edge of the city. Here put our thumbs out once more. We realised that looking Serbian makes it easier to get a hitch as a man waited just minutes for his ride, whereas it took us a while longer to get our first. Wen we did, it was an old man with a car with an indicator problem. He agreed to take us 10km on the 100km trip. He dropped us in a really prime hitching spot, which meant our next pick up was nice and easy.

The next car we got into continued the theme of fighter Serbians. He was a naval officer with a rather bitter outlook on the relationship between Serbia and its neighbours. He had broken his hand fighting at a recent festival and was heavily scarred. Yet, to us he was very helpful. He claimed that there were no speeding laws in Serbia so showed off in speeding beyond 100mph on an A road. This soon came back on him as we were ironically pulled over by the police for speeding. He was fined 50 euros.

After being dropped off at a public bus stop we arrived in Belgrade, about 30 hours after setting off. However, we had experienced so much by hitch hiking. We will probably spend a whole day in Belgrade before getting out thumbs out again.

On a side note: it is suspected that I have been bitten by a spider. As a result my right hand has swelled up. This is a concern.