Amasya gave us exactly what we were looking for. We had become too accustomed to cities and needed a break from the concrete monuments and crowds of people (outside of Ankara). Amasya is a beautiful place, off the normal tourist trail, with an elegant river flowing between old Ottoman houses and lively riverside cafes. Yet, it’s biggest attraction is its age. At 7000 years old it offers mystique in its tomb caves and intrigue about the comings-and-goings of yesteryear.

That said, our initial arrival in Amasya was far from as romantically smooth as the city itself. Our coach had arrived 2 hours early and thus released us into the coach station at 4am. Reluctant to move on at such an hour we decided to sleep in our sleeping bags on the floor. At around 6am we woke with swarms of flies around us. We guessed that they, and everyone around us, knew that we had not washed or changed since Istanbul (not our choice).

After being offered pricey onward travel at the station we decided to risk walking into the city to find our next ticket. After a 45 minute walk we found out that there were no tickets cheaper in the city. I decided to use this opportunity to leave the bags with Fletch and walk back to the bus station with a free back to buy the onward tickets to Erzurum.

We had managed to stop for breakfast at a place owned by a man who used to live in Bristol. He very kindly gave us free tea with a chicken sandwich.

Once I got back to Fletch we dumped our bags with a lady who claimed to be a tourist information rep and moved on with our day. Usually we would have left our bags in our hostel room but we had decided to camp tonight.

Our first stop were the famous Turkish baths. Not only did we want to experience these, but we were also in desperate need for a wash. We headed towards a hamam recommended to us by a local man. We were told to change into our underwear and head towards the steam room and sauna where we furiously bathed ourselves in warm, clean water. This was an extra special moment as the call to prayer echoed in the room from the mosque next door as we on our backs wallowing in cleanliness. 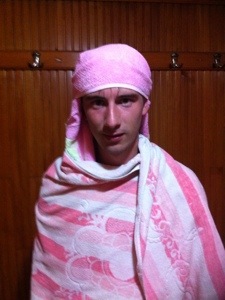 We were to go from feeling very grubby to very clean indeed. The owner offered a massage to us, which we accepted. The massage turned out o be the human equivalent of a car wash. A middle aged man coated me in soap and foam and scrubbed my body from toe to head (certain body parts exempt). We made me as clean as I’ve ever been before ironing out the copious knots in my back and legs. It felt amazing to be clean once more. I don’t know who was more undignified: me getting a body wash from a middle aged man, or the man giving another man a wash. Unfortunately there are no photographs of this moment.

Feeling fresh we then explored the town’s river side. We found a dried up waterfall (the fact that it was flowing fast in the morning made me sceptical about whether it was genuine…perhaps that’s because I had the wool pulled over my eyes too many times in China). 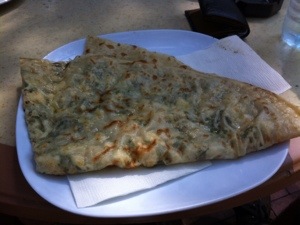 We tried some food of Amasya origin, which turned out to be glorified omelettes before trying out tea in many of the riverside cafes. We were lucky enough to experience dinner at a cafe park where the locals seemed to be hanging out. Here we listened to some live music and drank more Turkish tea.

As the sun went down, the lights turned on at the riverside. This meant that the wooden Ottoman houses lit above the river, and the cave tombs and castle that rose above us also lit the night sky. It was a fantastic sight. In fact. It reminded me much of Xiliang last year, and had a very similar feel. 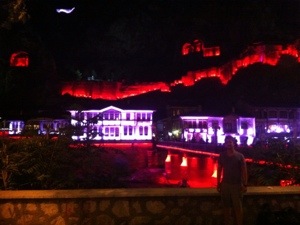 As the night sky was becoming littered with stars we decided it would be a good time to pitch our tent. We agreed to take a risk and camp beside the castle at the very top of the mountain. We had been told that it was accessible by road so flagged a taxi to get there. The taxi driver pulled the old trick of ‘my meter is broken’ and over charged us by a couple of pounds, I was a little annoyed at myself for falling of it.

The castle, situated upon tombs, was empty at night. So empty that the taxi driver hinted that we were mad to go to the top of the mountain in the dark, particularly as it is built on top of various tombs. This gave the forest around it an eerie feel. We found a spot about 200m from the castle, in what appeared to be a picnic spot. We quickly assembled the tent but were spotted by an angry dog. Thankfully for us the dog was tied to a tree, but its owners were not far away. 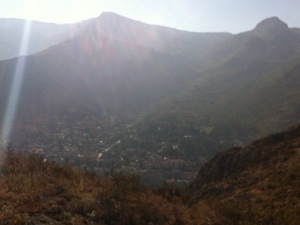 In the dead of the night we had not removed every stone from beneath the tent. This made for an uncomfortable night, but we did get more sleep than the previous evening.

The morning was a joy, ignoring the nearby cockerel. As I poked my sleepy head from the tent I was greeted with the most incredible view of Amasya from above, we were blessed. After putting away the tent and eating the breakfast we purchased the night before we walked down the mountain and dropped off our bags once more. We then climbed the more conventional route via the tomb caves. It was said that these are 5000 years old, which make them an amazing feat f engineering into a cliff face. At these spots we took time to admire both the tombs and the view that they looked out onto. Although we didn’t feel entirely safe facing a sheer drop we both maintained our balance. 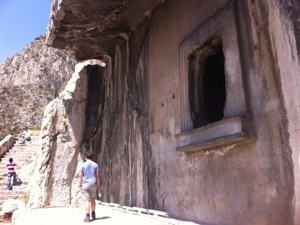 Since we felt Amasya had already spoilt us we tried to find a place to catch the Community Shield. We found a bar which was apparently run by Galatasary Ultras. This was a good bet. It turned out that they didn’t have the English football but, as we were in control of the TV, we caught up on Fenerbache’s midweek action. Our choice of match was not accepted by the ‘Ultras’ so we watched a German game instead. The Galatasary maniacs loved that we could name a few of their players and asked if we old come back later for Galatasary’s Super Cup gave against Fenerbache. They offered to reserve our seats as they converted their bar into a theatre. This old have been a great experience to watch but we had another bus to catch. As a result we watched the majority of the game with a station load of Galatasary fans at the coach station. They really love their football in Turkey.

Amasya had provided us with a venue quite unique to the others on our trip so far. We thoroughly enjoyed being the only tourists around and were even asked ‘why are you here? English people go to the beaches in Turkey’. We took that as a big compliment.