The final leg of a long summer journey brought us into the enigma that is Azerbaijan. Neither of us knew what to expect from the country that didn’t really want us in anyway, but what we got was a lot different to anywhere else on our voyage. 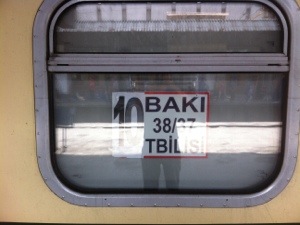 After a casual morning in Tbilisi we boarded the daily 16:30 train towards Baku in Azerbaijan. It was to be our longest journey yet as it was due to arrive at 10am. This was not because of distance, but due to the stringent security checks at the Azerbaijani border.

We were joined our train by a gang of thuggish looking Germans. They were tattooed, bruised, and massive. Why on Earth were they visiting Azerbaijan? It turned out they had reason. When we asked them at one of our numerous stops they told us that they were following their football team, Frankfurt, who were playing in the Europa league in Baku. We made a decisive choice to watch the match as we had missed Arsenal in Istanbul and Spurs in Tbilisi.

At the Azerbaijani border the train was ground to a halt whilst every passport was checked. We were both asked a series of questions about our purpose for visiting Azerbaijan and photographed by the military. They also checked our bags, albeit not very thoroughly. Eventually, after kicking an Indian couple off the train, the military let our train continue over night towards Baku. This meant we had a nice sleep in our third class cabin.

We were woken by a women who liked to giggle to herself early the next morning. It was clear from looking out at the beautiful landscape that Azerbaijan is not as rich as it makes itself out to be, there is obvious poverty in the towns and villages we passed.

Despite our delays we arrived on time, as if the stops are part-and-parcel of the daily journey. We decided to get a train immediately out of Baku since we had another day to explore the city properly. There appeared to be no train out of the city and we ended up on a bus towards the nearby city of Sumqayit thanks to the help of a Russian guy.

We had originally wished to visit the mountain villages of Azerbaijan via the town of Quba. However, we had given too much time to our visa acquisition in Batumi and were no reluctant to travel too far from Baku in our last days.

A very cheap bus saw us arrive in Sumqayit beside the Caspian Sea. Our first glimpse of the water was not how I had dreamt it. It instead consisted of piles of rubbish and a few bonfires lit across the beach. In Azerbaijan, Baku is the show town and I was starting to think that everything else had been neglected. Nothing I saw in my time in the country changed my view. 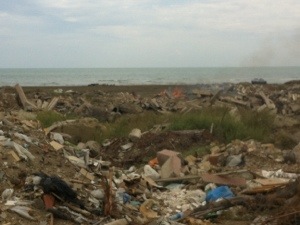 We had a very cheap lunch in Sumqayit and people were fascinated to sea us. They probably wondered why tourists would visit their city, and it wasn’t long before we questioned it ourselves.

The half hour bus back to Baku saw us exploring the city for a suitable park to pitch our tent. Both of us refused to pay the minimum of $42 for a hostel bed. As it was still daylight we accepted that we could only leave possessions in the tent that we could get home without. This meant that we both ventured beyond the park with our wallets, phones, and passports (I decided that my walking boots were also valuable enough to wear). Everything else was open to be robbed (with a potential insurance claim for smelly boxer shorts).

We decided to have a drink in a bar before heading to the stadium for the football. The bar we ended up in was a little more seedy on the inside than the out. We were placed in a private room and served by a promiscuous looking lady. We are still not sure if we ordered what they expected by eating cheese and drinking beer.

After eating supermarket ham and tortilla we headed towards the stadium where it had become lively. We were told by a professional wrestler (naturally) that people don’t generally watch Qarabag play in Azerbaijan as football is not a huge sport here. Today was the biggest game they’d had in years though, and the place was buzzing. 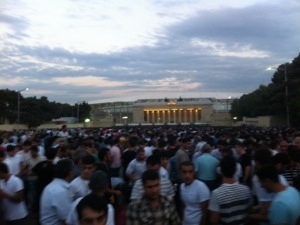 We managed to buy our £3 tickets from a tout at the stadium and made our way to our designated section. The stadium was electric with noise. Any empty seat, of which there were few, were being constantly banged, whistles whistled, and chants sung. The people of Azerbaijan were really up for this and they were waving their national flag at the Germans with pride. We were also lucky enough to have a young lad in front of us who seemed to support Frankfurt just to wind his mate up. This was a constant source of entertainment.

It soon became clear that Qarabag are nothing short of a pub team and Frankfurt should have scored more than the 2 they managed. But atmosphere in the stadium meant the result didn’t really matter to us at least.

After the full time whistle we headed back in the direction of our tent. As I say constantly in my posts, I pride myself on my bearings and sense of direction…but in Baku it failed me. We ended up far from the tent and had to rely on GPS to get us back. I was a little embarrassed.

A long day resulted in a good sleep in an unusually sweltering tent. We woke up to a political rant from a gardener about how he hated Azerbaijan’s government for spending all it’s money on Baku. A theme that appeared to linger in many people’s minds.

Our sole ambition was now to enter the Caspian Sea at a pleasant part of the coast. We headed towards the Baku Bulvar where the city meets Baku Bay. Here we could only find a harbour and oil coated water. I refused to touch the water as this would complete the mission and I wanted to jump in to finish it off.

We delayed the visit to the Caspian Sea to walk around the Old Town. Although quaint and pretty it was a little over renovated. However, I greatly enjoyed seeing another side to a city that was otherwise full of sky scrapers and building sites.

Once we had explored the narrow, cobbled streets of the old town and the major commercial area of Baku we passed the Carpet Museum. I had half joked about visiting (the joke was to save face but I really did want to visit as Azerbaijan is famed for its carpets). We got a glimpse of a few carpets before deciding it was too expensive. 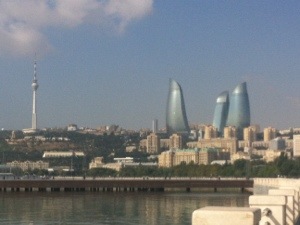 At this point we were offered assistance by a man named Zico. He offered to show us a way of reaching a nicer beach to enter the Caspian Sea. He also gave us some information about Baku itself.

Baku, as is blatantly obvious just by walking through it, is rich in oil. The government is exploiting these riches by building elaborate buildings and also plan to build a set of islands in the Baku Bay (hence the comparisons with Dubai). Zico told us that the city is due to be finished in 2020. There is something about it that I think has the potential for success. That is, unlike Dubai, it has humid but moderate temperatures throughout the year, it has good links to Europe, and it is not surrounded by desert. I believe, if they sort out their foreign policy, Baku could be a success (but I’m no politician).

We got our 15km bus ride to the beach at Sixov. Here we jumped out and headed across the littered sand towards the sea. An oil rig was positioned right in front of us, but this made for an authentic look rather than an eyesore.

With a quick removal of clothes and a run, skip, and a dive we entered the Caspian Sea. Our mission was complete! We had made it from Budapest to Baku in under 26 days and had a bloody good time doing it! The feeling when hitting the water was amazing (and expertly captured by Fletch). We stayed in the water for a while, even washing using my reliable soap. We had a great sense of achievement come over us. 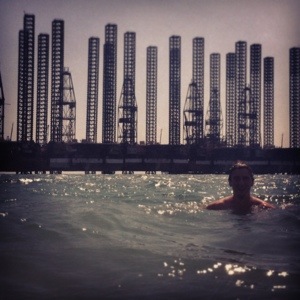 Despite this, the challenge was not complete as I still had to make it to the airport. We had some dinner on 28th May street and asked about public transport links to the airport. We were told that taxi was the only option. Yet, the Internet said otherwise so I went with the positive option.

Myself and Fletch had therefore come to the end of our journey together. He had a later flight than me so would be staying until the morning. We had a brotherly hug and went our separate ways for the first time. A great companion! 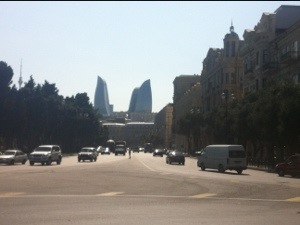 I thought I got very lucky as the 116 bus that runs towards the airport approached as I arrived at the stop. The bus driver told me that there were no more buses running to the airport now. I was left scratching my head as a taxi was the last option I would consider.

I always think that something will get me out of a sticky situation, but I needed a wee first. I snuck into a restaurant and used their toilet. On my way out I heard a man speaking in English, a rarity here. I asked him if he knew the way to the airport. He told me that he and his girlfriend were also looking for a way there, and they were on my flight! What a slice of luck!

Together we went back to the bus stop armed with the basic Russian that the Czech couple could speak. As suspected the buses had finished. Since the girl was blonde we felt we had a good chance of getting a quick hitch to the airport when a man approached and told us that he would take us to the airport for the equivalent of £8. It was a little dearer that expected but a lot cheaper than a taxi for the 30km distance. It turned out that the drivers grandad was Czech, hence why he was so keen to take us.

We arrived 3 hours prior to check in which meant that we could all enjoy a beer before getting out our sleeping bags for a nap before our flight.

At 4am the adventure in Baku was over. A strange city in a puzzling country, but a fitting end to an incredible journey. It was time to grab a flight to Budapest for a day of R&R in the baths and enjoy an Arsenal victory at last. 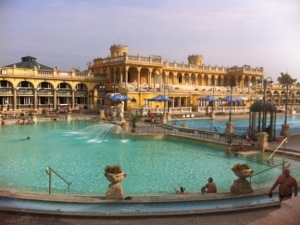 Another summer, another success. Home, and reality, await.