Krakow and Auschwitz – A powerful day.

A successful day of hitchhiking meant we had the majority of an afternoon and evening to enjoy Krakow before our planned visit to Auschwitz.

Following check in at a far more welcoming hostel we had a stroll around the centre of the city. It was clear from the offset that Krakow was more vibrant than Warsaw. It’s main market square in particular offered a picturesque first impression. There were countless bars and restaurants and no shortage of things to do and see.

Our walk took us beyond the old town via the castle and into the old Jewish Quarter. It was there that we decided to grab a beer and chill out for a bit. We decided upon an authentic looking Jewish bar which was lit by candlelight. .

All the walking built up an appetite so we returned to the main market square in the old town, conveniently a stones throw from our hostel. We once again dined on traditional polish food, including pierogi, and dabbled in the famous nightlife of Krakow. However, we saved our dancing shoes for the next night. Instead we decided to return to the hostel in time to assemble in the common room where the receptionists had arranged a party (of sorts). The concept seemed good until it appeared to be overran with whiny teenage Americans. We called it a night soon after.

Once again we had an early start, but this time it was met with excitement since we were heading to Auschwitz. I had always considered Auschwitz to be on my list of places I must see, but had never actively tried to go until now. This left me quite excited. My excitement to see a place where people were mass murdered might seem a bit psychopathic though.

This time we met with a coach just before 9 which was arranged to take us towards Auschwitz. On the way they presented us with a video outlining the atrocities which took place there. The video was so shocking that the packed bus fell silent throughout. It was an atmosphere that would continue throughout the day.
>

We arrived at the first Auschwitz camp. This was the smaller of the two that we were to visit. It featured the famous ‘Arbeit Macht Frei’ entrance and the brick bunkers had become a museum to the camp. We were shown several shocking things as we walked around. Most of them unbelievable. The abundance of human hair and clothes taken from prisoners for the benefit of the Germans, the horrendous conditions for prisoners, the various different methods of mass murder, and most of all the scale of evil that had been carrier out. It seemed even more odd to experience Auschwitz in the sun. We felt as though a mournful grey sky would have been more suitable.

Neither of us could get our heads around how this was able to happen. Our tour of this camp came to a conclusion at the shooting wall and the mass gas chamber. Just standing in the spot where up to 2000 bodies lay on a daily basis left a sombre feel.

</a>
The next camp was 20 times larger, at Auschwitz II – Birkenau. This had been preserved as a memorial. I don't think either of us had prepared ourselves for its vastness. We initially stood where the Jews, gypsies and poles arrived at the camp for 'selection' by a doctor. This either meant immediate death in a gas chamber of relentless hard work in the camp. The amount of people captured by the nazis was so great that no one person was irreplaceable. For that reason they were only just kept alive and worked until they were no longer fit to work, and once they died they were replaced. Auschwitz is the most inhumane place imaginable, but it is also massive. We were left in complete shock at the crimes committed there. We could not even begin to try to empathise with those that suffered. An amazing experience that everyone should visit at some point.

Our return to Krakow saw us back in the Old Jewish Quarter, where we had a drink at the bar famous for ‘engrossing Steven Speilberg in Jewish Culture before Schindler’s List’. Whilst we were there we hatched a plan for the evening. We researched several places to visit during the evening to embrace Krakow by night. The first of which would mean returning once more to the centre. 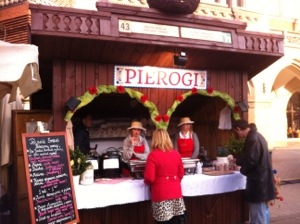 Slightly beyond the centre we found our traditional Polish restaurant, named Chata. It was incredibly rustic and warm (and cheap). I chose to dine on some goulash in bowl created by bread before another polish delicacy of Bigos (only for sauerkraut fans). 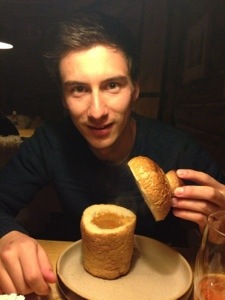 Following dinner we found ourselves on our own bar crawl. It took us to many hidden places within the city, all of which were vibrant. We even ended up at a packed student bar which overflowed with young people onto the streets because of its cheap prices.

Kate wasn’t impressed in one bar as a man turned up and urinated on the floor beside the toilet entrance. He happened to be wearing a Scottish football shirt.

Our night finally came to a close when I fulfilled Kate’s request to visit a nightclub. Krakow appears to come alive at night and you don’t necessarily need to know where you are going. It is a very attractive city for all.

It had been a very powerful 30 hours in Krakow, a city that rightly boasts to be Poland’s centre of culture. The highlight was certainly our excursion to Auschwitz, but the city didn’t let us down either.