Today felt like a very long day. We had a moderately late night which meant it felt like an exceptionally early start. Yet, we continued to stay on schedule and successfully reached our intended destination with time to spare to enjoy it.

For the second day running we obtained a free breakfast from a friendly cafe in central Krakow before jumping on a tram bound for the outskirts of the city to the south. 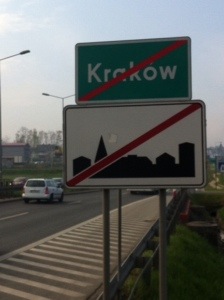 As with previous experiences with Kate attracted cars and we were picked up within minutes of standing beside the road. This time we were picked up by a couple heading for a weekend break in the mountains. As they pulled over they didn’t quite fit on the hard shoulder and nearly caused a collision with an oncoming car. We would’ve felt very guilty had they crashed.

Thankfully they spoke relatively well in English and were able to provide us with some good tips about the road. They dropped us off beside the village of Lubien where the road was dishearteningly quiet.

Despite the lack of traffic Kate managed to pull over our next hitch before I had put my bag down. I was becoming a little jealous that I had, up until now, claimed none of our rides. Still, our waiting times were very limited.

This time we had an old man. Kate decided to sit next to him because she thought he looked trustworthy. He took us the short distance to Rabka-Zdoj where we were quickly picked up by a man who looked like Mr Bean. He went beyond where he was intending to go in order to drop us at the small bridge bordering Poland and Slovakia. 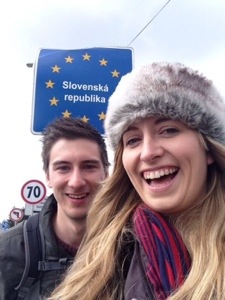 We crossed the unmanned border on foot before attempting to hitch hike on the other side. For the first time we had to wait more than 10 minutes for a lift. Initially we blamed the Slovakian drivers for being less friendly than the Polish. In truth the road just wasn’t as busy.

Still, we managed to get my favourite type of lift: a truck. The driver was from Romania and spoke no English. However, he was willing to take us the 60km we required along the E77 to Ruzomberok. I get the impression Kate enjoyed this journey more than any other as she sat on the highly suspended seat whilst I lounged on the drivers bed with my feet separated from the floor by pornographic newspapers. 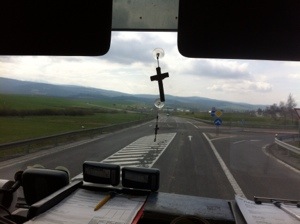 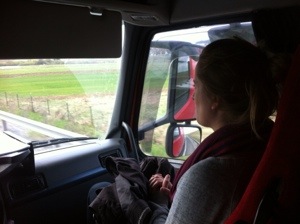 From Ruzomberok we were heading west towards Zilina. We had a little bit of a wait before our final lift of the day. This man took us right to the outskirts of the small city. As a result we had reached our most obscure destination on our itinerary and done so before the mid afternoon.

Zilina is a city most famed to me for having a football team in the champions league, whom happened to play Chelsea, a few years back. As we approached the city centre we discovered that Saturday is a day where everything closes. We were finding it hard not to refer to Zilina as a ghost town.

Despite our first impressions we soon discovered Zilina to have lots of character. It’s main square in particular was quite impressive. Still, it lacked the hustle and bustle associated with a city. Kate remarked that even the people that were out weren’t making any noise.

We still had to find a place to stay and the research I had done previously led us quite away from the town centre. I could sense tiredness in Kate and felt guilty about leading her a long way on foot. Eventually we did find somewhere to stay, but it was a lot more expensive than we had laid previously. We justified this because we did not pay for the postponed Wisla Krakow game on the previous evening.

Our 5pm check in meant we had an hour to head back to the centre in order to find a bar for Arsenal’s FA cup semi final kick off. When we found a couple of bars it soon became apparent that Slovak TV was no broadcasting the game. This left me a little nervous.

We deiced to grab some dinner in a restaurant with wifi so I could follow the commentary. I eventually broadcast the game via radio in the restaurant, which didn’t please the waitresses. What made it worse was that it went to extra time so we spent over 2 hours in the restaurant. Kate doesn’t have an interest in football so I felt the need to apologise profusely for making her wait with me. I know she was too polite to say that she was fed up, but I owe her one for sticking with me.

We eventually hitched onto a team back to our room where we both crashed out and decided not to set an alarm for m 200km journey to. Bratislava in the morning.

Yet another very long days yet another different place. What we saw of Zilina had been interesting. What is undeniably true is that the quaint centre of the city acts as a complete contrast to the industrial eye-sore of its suburbs. Now for our final 3 days.
>