At the end of the school year my class shared their short term goals with me, and they enquired about mine. I informed them that my goal for the summer was to reach the ancient city of Petra: a city carved into the mountains.

In arriving in Petra I have achieved this goal and the rewards were endless.

It had turned out that a lad in our dorm was keen to join us on our trip to. Petra. This meant we had extra company and another wallet to divide our travel costs by. His name was Yix and he was Singaporean, although his 8 years in the US had clearly contributed to his personality. We left our hostel in Eilat and headed for the Israeli / Jordan border. Due to our early arrival (6:30) we avoided any of the lengthy queues we had been warned about previously. We were safely through countless security checkpoints within an hour.

On the other side we had to negotiate a price with the taxi driver to take us to Petra. The transport links in Jordan are very sparse and so taxis seem the most popular mode of transport, despite remaining relatively expensive. Yix took on a very aggressive approach with the haggling, a method that didn’t sit well with our own approaches. The taxi driver eventually started ignoring him and allowed us to negotiate a cheaper price, meaning we had to go via Aqaba rather than direct to Petra, but still resulted in a cheaper fare.

The smallest Jordanian man also joined us in the taxi but just slept the whole way. I ended up in the back middle seat crushing all sorts of essential body parts, despite his 5’3″ frame.

Leaving so early meant we were at our hostel in Wadi Musa (Petra) by 9:30. The kind gentlemen at reception made us a packed lunch and sent us on our way towards the ancient city.

Walking boots were not back on our feet and the desert sun back on our faces as we strolled through the entrance to Petra. The first part of our walk was unshaded but flat. We entered several caves carved out of rock and marvelled at the excellence of the workmanship behind them. We felt rather foolish when we discovered the true master pieces within Petra.

A 2km walk along the ‘Siq’, a ancient valley connected to the city, enabled us to picture the inhabitants of the city walking and gave us a greater appreciation for the engineering involved, particularly in carving a water system out of the rock. 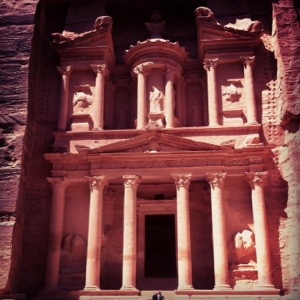 At the end of the Siq stood the feature most synonymous with Petra: The Treasury. It looked as though the great entranceway was the only thing of interest to the sun as it rose out of the shadows. The brilliance of the carving into the rock made the treasury remarkable. That, in addition to its age, justified the Treasury of Petra as a wonder of the world on its own. James and I couldn’t help but recall Karl Pilkington’s visit to Israel and Jordan at this point.

We wondered beyond the Treasury and into the vastness of Petra. For another 15 minutes we remained on relatively flat ground, visiting several caved tombs and an ancient theatre on route. 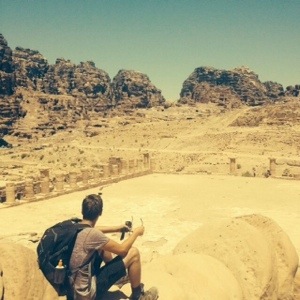 It was then our mission to climb the side of one of the hills to reach the Monastery at the top. At times the intense desert heat brought drips of sweat down our faces, and the hill was a slight challenge due to the heat of the day. However, it was always pleasant to pass fat westerners sitting on donkeys using more energy to keep balance than walking up a few steps. Still, we made it to the top and rewarded ourselves with some shade and water before climbing the 6ft wall to enter the monastery. In fact, the photos do not give any indication of the height and size of these masterpieces. The base, before the doorway, of the picture below is 6 foot tall and required lots of leverage to get in. 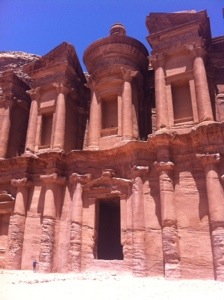 Beyond the monastery was a sign boasting ‘the best view in the world’. We were drawn to it but ended up finding our own view. At the top of the highest point we had clearly come to the end of the ancient city and could just see a vastness of rock beyond and below us. James has coined the term ‘anti-mum’ for photos that look life threatening but actually aren’t, yet are enough to pull on maternal heart strings. We took a few up there.

From the monastery we were walking in the hottest part of the day. We decided to wonder away from the tourist trail and embark on a trek of our own. This initially took us back up another steep climb to an old man’s cove. He claimed to offer anyone tea but had run out. Instead he pointed us in the direction of several other parts of Petra, via a back route. Yix used his compass to navigate. This was slightly unnecessary but I still felt as though I had a rival navigator.

We walked for about another hour with the sun bearing down on our necks, taking regular water stops on the way. We passed several other fabulous caves very aware that we shouldn’t become too de sensitised to their magnificence. Yix found an old woman stumbling over the rocks near the temple of a roman soldier. He helped her find softer ground before she asked him for money.

From this point it was all up hill as we were heading for the high place of holy sacrifice, where it is rumoured that animals and humans were sacrificed. It struck us all that much of Petra was about celebrating and housing the dead, it has very little evidence of the existence of life behind. 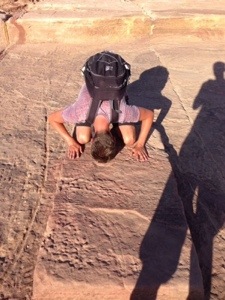 When we made it to the very top we were beginning to feel weary. We had been walking more or less solidly in the sun for almost 8 hours. We were greeted by the music of a Beduoin nomad playing her pipe and singing beautifully. The romance of it abruptly ended when she started shouting down the hill. 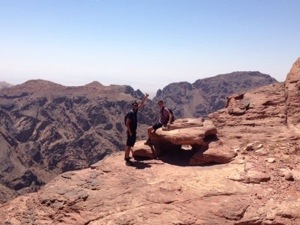 The view from the top was worth the climb and gave a spectacular panoramic view of the whole city. We later found out that the trek we had just completed is regarded as the hardest and most rewarding in Petra. We were pleased with that. It was then time to return back to the hostel for a rooftop dinner and a well earned sleep. The rooftop view of Petra was worth the bed fare on its own! 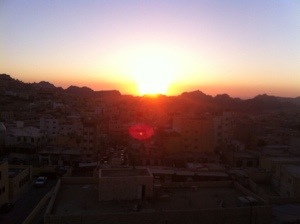 The next day wasn’t as hard-fought as the first. But it was a welcome addition to our Petra experience.

We got up, ate and were out of the hostel by 9:30. A 2km walk brought us back to the entrance of Petra. Before reaching the entrance to the Siq we took a detour heading towards a part of Petra we had not seen the previous day. The hostel owners warned us that we would probably be stopped along this route and made to take a guide. With this in mind we decided to ignore the shouts and pleas to stop from the people on the route. This eventually lead us to be surrounded by Jordanian policemen insisting that we stop, hand over our entry tickets and wait for further instructions beside the police cabin back on the main route. It was left unclear why we weren’t allowed to follow our route, but we were eventually set on our way with our tickets back in hand. An exciting but confusing experience.

We headed back via the Siq and the Treasury before taking a different route via several more tombs. We had covered so much the previous day that it only took about 3 more hours of walking before we had seen everything our map and the Internet had informed us to do. 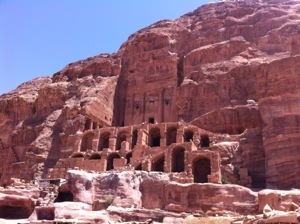 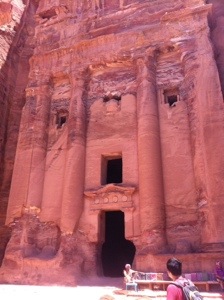 By the early afternoon we had walked back to the hostel and eaten another pitta falafel. James decided to take advantage of the Turkish Hammam close to the hostel, whereas I took the opportunity to write this. It was a nice relaxing afternoon on the rooftop for me.

We were joined later by other western tourists visiting the sight. Together we enjoyed food, drink and shisha on top of the rooftop. It was a very chilled night in with some great people.

Petra is somewhere that has to be seen to be believe. I’m still not sure I can quite believe it.