The last couple of weekends have taken me to two different mountains where I have been able to walk 2 very different hikes.

Nicki and I decided that we needed to remove ourselves from the city life. Partly due to the fact that I was growing irritable to the non-desirable habits of lots of Chinese people (although I am now writing this on a train beside someone who wants me to hear how loud he can chew). It was true that going somewhere less crowded and polluted was a welcome break fro us both.

Nicki met me at Hangzhou train station where we took a short train to Deqing. There were people sitting in our seats but we decided to leave them as our journey was to be no more than 10 minutes. However, we initially annoyed everyone by opening our beer all over them before ending up coming to a standstill and waiting an hour to get to our destination. In retrospect a taxi, bus, car or bicycle would have been a better option of travel.

Fortunately for us the small city is a stones throw away from the mountain and our lodge for the weekend.

We woke up relatively early on the Saturday morning to begin exploring Moganshan. Our host had made us breakfast to set us up for the day. We initially tried to make our own way towards the trails as we were aware that Moganshan is full of trails that are not well trodden. This exploration led us to a clearing behind a house. We decided to explore it.

Soon after beginning our hike we realised that there was no one else on this trail. This meant that we had the bamboo that enveloped us all to ourselves. It was nice to try to spot paths beneath the overgrown floor, but we were slightly concerned with the number of midgy and mosquito bites we were obtaining. In fact, we could not stop moving for more than a minute or so without being bitten. Still, the novelty of the bamboo forest never wore off, nor did seeing the occasional praying mantis. 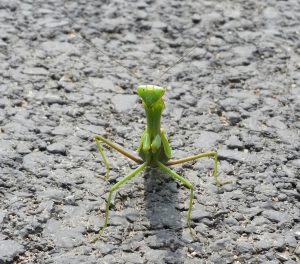 We eventually came to a road which took us further up the mountain in a less scenic but more bite-free route before continuing along another hidden trail. It was really nice to walk without a map and without an end goal. We were carelessly walking with the knowledge that our lodge would simply be back down the mountain.

In fact, when we decided we might need to eat again, we walked back down the bamboo forest paths and stopped for a local lunch and a local beer.

Following lunch we decided to walk a different route, this time following one of the trails on a map. We attempted to ask some Chinese people for directions but the ones we chose appeared to have very little Mandarin Chinese as they were also visitors. It didn’t help that my Chinese isn’t quite where I want it. Still, they decided they wanted to go where we were going so joined us. Chinese people walk slowly at the best of times but these were of the older, even slower, generation. It wasn’t long before we made our excuses and walked on.

We came to an open lake along the trail and ventured down through the bamboo towards it. There were Tibeten flags waving beside the lake which added to its serenity.

We called it a day after that, satisfied that we had fulfilled our objectives for the day and keen to have the late afternoon resting on the terrace of our lodge, which didn’t disappoint either.

In fact, we spent the remainder of the day sitting on the pine terrace looking over the river with our feet up. We were happy to sit smugly when a couple of English girls turned up demanding the world from the poor family who owned the place. We decided that the family would prefer us, if it mattered. 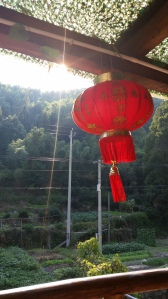 On the Sunday morning we were in no rush to get up. Instead we were offered a lift from the landlord to the train station around midday (because we knew they liked us).  This gave us an opportunity to walk for a while in the morning to take in some of the fresh air before retuning to city life.

Since Nicki had to work a few more days before her half term began I decided to use her work days to go somewhere that wasn’t on our ‘to-go-to’ list. In hindsight, I think it probably would’ve/should’ve been.

I had spent the Saturday in Ningbo before catching a 6am train to a small city called Shangrao in Jiangxi province. From there I caught a short train to Yushannan, where I thought the mountain began (because I stupidly used a map and not the internet).

I refused to get in a car from one of the hassling drivers who were begging to drive me somewhere. As an escape I jumped on a public bus crowded full of people who stared at me with there chins dropped. I was definitely beyond the major cities here. The driver asked where I was going, but I was only able to tell him ‘I don’t know, I’ll have a look’.

The bus stopped in a place that resembled civilisation but had far less traffic. I got off the bus at the point and found myself outside a bank where I asked for directions to the mountain. I was greeted by 4 girls who were willing to help in exchange for a photograph with them. They then gave me a mooncake to eat in celebration for the day’s national holiday. Ultimately I left the bank with a set of directions which made it look a struggle to get to the mountain. 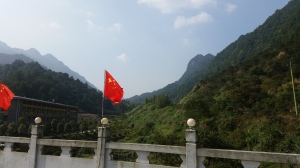 In fact, it wasn’t. I was quite close to the local bus station where I was able to get on an old bus heading for the mountain. It was a 70-minute journey but I was pleased that it was costing me less than 2 pounds to get there.

I arrived mid afternoon so used that time to have a brief walk around the village before sunset and then having an early night before the morning trek.

On the bus journey the previous day I had met some university students who were also trekking the next day. I asked if I could join them, and they were pleased to welcome me. I was to meet them somewhere near the peak of the mountain. 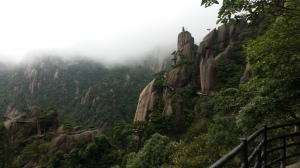 Sanqingshan exists in the midst of hundreds of other mountains and the cable car to the start of the trek is like a scene from Jurassic Park. It took me, and the Cantonese people I initially found myself with, beyond the clouds and into the morning mist before disembarking to a feeling of chilliness.

The morning clouds were still prevalent as I began walking along the narrow mountain-side paths. The place is clearly reminiscent of Zhanjiajie, Hunan in its beauty and the unpredictable behaviour of the weather.

Within half an hour I stumbled across a camp from the previous night. Eating breakfast beside it was the gang of university students I met the on the bus. We agreed to walk together for the remainder of the day.

It was a good job that I had got a good sleep the previous night as the day was slightly relentless in terms of miles walked, inclines made, attempting to communicate in Chinese (which is more tiring than I imagined), and battling the weather. It was certainly fun to become part of a Chinese group, which helped restore my faith in the nation’s people. They were kind and friendly, helpful, and humorous.

There were points on our trek that made my heart leap. The paths hug the mountain in an unnatural way that leave you feeling uneasy about taking another step. Indeed, one of our group refused to step too far away from the mountain face in fear of being swept off the path to the abyss below, which wasn’t helped by the unpredictable wind.

Like Zhangjiajie, the rock formations are the most stunning parts of the mountain as they leap up from the Earth in the strangest of ways. 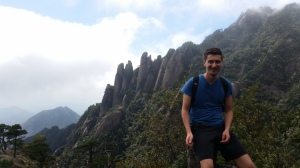 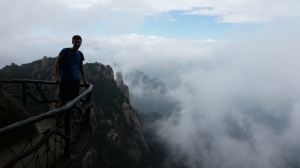 When the clouds eventually cleared we were able to see the vastness of the mountain range in all of its splendour. Yet, as we climbed we approached more clouds and the weather became moister. This meant that the wonder of the mountain’s mood replaced the spectacular sights we had been witnessing.

The mountain itself is famous for its Taoism and has a temple at its highest point to celebrate this. It was always our goal to reach there at the midpoint in the afternoon as we wanted to set up camp there for the evening. Yet, we were left disappointed by the lack of opportunities to camp there. Undeterred we kept walking until we found somewhere more suitable to camp.

We came across a pavilion about 20 minutes later. We decided to set up camp beneath the shelter it offered as the weather was getting slightly dangerous for a continued hike along the mountains edge (in visibility, slipperiness and wind). The Chinese people I was with (who I haven’t named as I regretfully don’t remember their Chinese names and they didn’t have English ones) somehow found a sweeping brush to remove the bugs, leaves and grub from our sleeping spot. It is worth noting that we picked up a middle aged man with a tent to himself at some point along the way, and I was able to sleep in his tent during the night. We assembled the tents and sat satisfied. 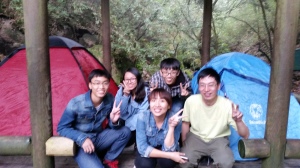 It soon became apparent that we had made the correct decision as a group of 3 lads came down from the temple and also didn’t want to risk their lives on the cliff path. They too put up their tents within proximity of ours.

Darkness set in quite early and we formed a circle beside the tents where all food was put in the middle and shared (of which I had very little to offer). We then played card games before taking turns to sing songs. It was a really special evening where I really felt pleased to have joined such a group as the experience would have been far less enjoyable alone.

We were all asleep by 8:30 and I slept peacefully beside the middle aged Chinese man we referred to as ‘uncle’. 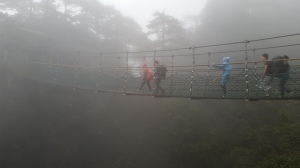 Our early night led to an early morning trek back down the mountain side. We braved the walk despite the imminent typhoon which had led to trains being cancelled below. The path hugging the mountain took a scarier turn when parts of it became see-through glass that enabled us to see what lay beneath(a drop). We then came across a rope bridge which added another element to our morning adventure. 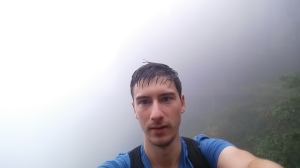 Due to the continuing mist we were unable to stop to enjoy many of the sights during the morning which meant we returned to the cable car base earlier than anticipated. With the help and company of my new friends we returned to Shangrao where I was able to jump on an earlier train back to Hangzhou to have a shower and wash my clothes ahead of the next adventure to Seoul, South Korea.

Treks in Yunnan, Hunan and now Jiangxi have seen me join up with Chinese compatriots, each welcoming me into their group on their own treks. My last two mountain trips have restored my affection for the Chinese people.