Udaipur had provided us with such a positive first impression of Rajisthan that Jaisalmer had a lot to contend with. It didn’t let us down.

Such is the vastness of Rajisthan that we spent 12 hours on a bus and arrived in the desert. We were told by the bus drivers that they knew reputable people who would take us from the bus stop to our hotel and that we should ignore any other rickshaw touts. We were happy to follow their advice but ended up in a tuk tuk with 2 men who took us to their own guesthouse and were quite angry when we didn’t stay with them (despite informing them of our reservation elsewhere as soon as we met them). After a semi – sleepless night and backpacks on our backs this was hardly a nice introduction to our new home.

We then went on search for our accomodation on foot and quickly entered the majestic fort of the city. It was beginning to absorb the brightness of the morning sun, which made it an impressive site. It looked like a giant sandcastle. 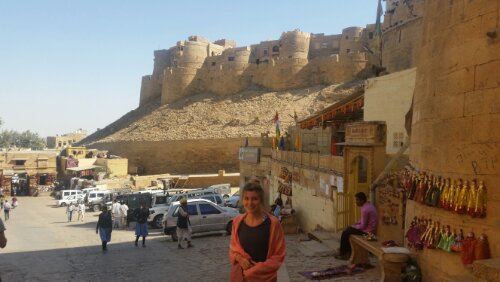 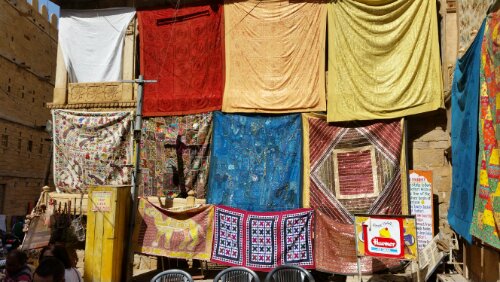 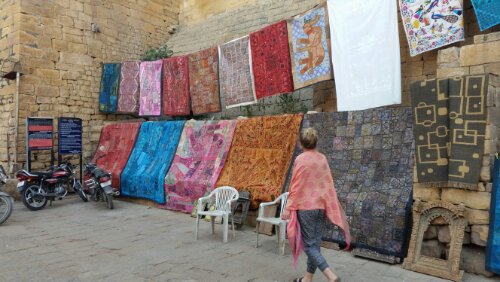 We had booked a room inside the fort. We felt quite guilty about this as we had just read about how the increase in tourism to the fort, and thus water use,  had put a strain on the foundations of the ancient buildings. However, we were given access to our room by the 2 teenage boys who seemed to run the lodge. To our surprise, and the surprise of everyone else we spoke to, they did not put pressure on us to do a trek with them (which was we already had a trek in mind). 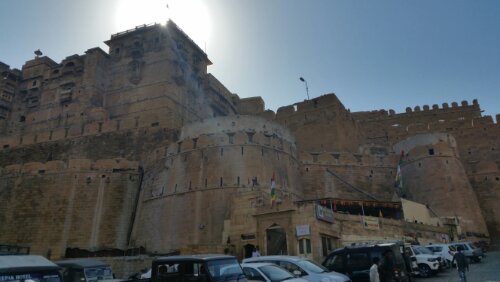 Our day in Jaisalmer took as to the fort’s sorrounding streets and the havelis within. We, as is becoming habit, had a rooftop beer in a bar run by Tibetens.

We then went for dinner at a restaurant beyond the fort, but with a good view of it. We ate on the floor and had a beer whilst being hosted by an incredibly friendly fellow named Prince, who insisted on blessing us more regularly than was comfortable.

And no day in India is complete without a spectacular sunset:

Or a cow at your front door:

Jaisalmer is a lovely place but we couldn’t help but feel part of its problem. It should be a peaceful old town but it has turned into a haven for tourists, such as us, eager to explore India’s far West.  For this reason we felt it had probably lost a bit of its charm.

However, Jaisalmer was just an added bonus for our reason to travel West.  We wanted to trek by camel into the desert of Rajisthan. And on our second morning in Jaisalmer we woke up, packed our desert essentials and headed for a jeep into the desert and towards our camel companions.

The Thar Desert isn’t like the sandy dunes of the Sahara (although it is in places), but dry land littered with green shrubs. On our initial jeep ride we were able to get a feel for the desert and avoid an hour of the intense midday sun. At the same time we got to know the people who were joining us on our trip: a young Dutch couple and an older English gentleman with his Taiwanese wife. All 4 of these people were very good company. 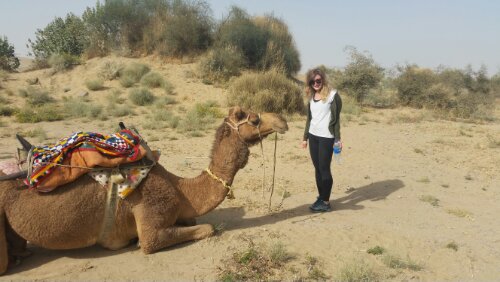 We then met our camels and our camel drivers in the desert. Earlier in the day I predicted that I would get the dodgy camel (like my excuse for being slow during when kayaking from Glasgow to Edinburgh) and it was immediately obvious which camel that would be when we saw it. All of the camels, except mine, we’re light in colour and clear of obvious scaring. Mine was dark with what looked like tattoos. Additionally,  he kept shouting before we even sat down. I was told later that he was complaining about a sore nose. Still, my camel looked a bit like a Bond villain. 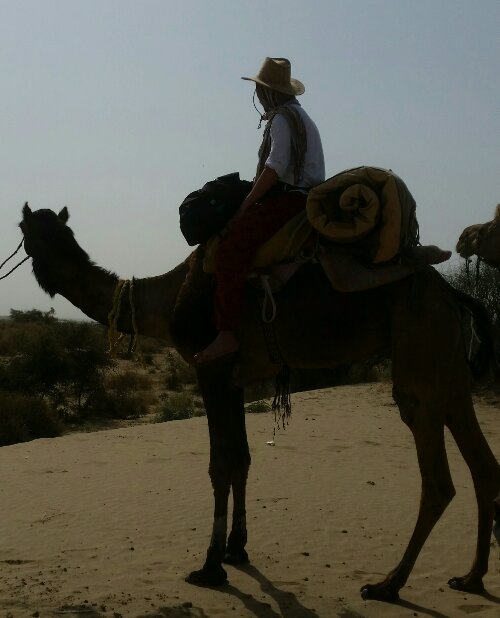 Anyway, it was immediately obvious that the camels were well looked after and the drivers were very gentle with them. I have never seen an animal continously wee for so long, which made me confident that they were being watered. One by one we mounted our camels and were lifted 8 feet into the air.  Much like on an aircraft, the take off and landing on a camel is the scariest part. Camels are not the most elegant creatures. 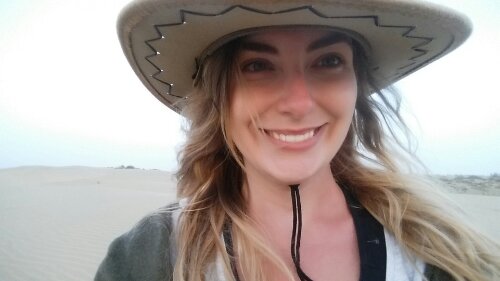 We then walked for a few hours across the desert, taking in the sights of wildlife around us and feeling the afternoon heat on our backs.

At one point we stopped off at a desert village. Nicki felt as though this part was slightly ‘grief tourism’ (partly why we didn’t explore slums in any great detail) and I agree with her.

The camels offer a bumpy ride and, despite the amount of padding underneath me, my boney bum was not quickly accustomed to it. Still, this was all part of the experience.

As the sun began to subside the temperature dramatically cooled and we were eagerly anticipating our dinner. We began an accent through the dunes. I am not sure how camels climb on sand with such weights on their backs. They seem to be capable of anything and look like they should be capable of nothing. 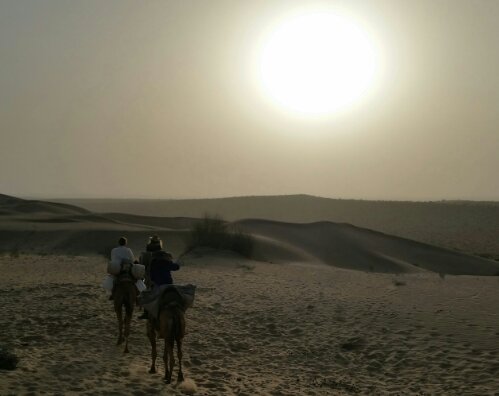 We eventually reached our camping spot in time to watch the sun set on the horizon. The sun was so large that it felt closer to us. We both sat on the dunes and posed for photographs until the sun went down and it was time to enjoy some masala chai by the newly lit fire.

The camel drivers turned out to be skilled cooks and entertaining singers, which made for a good campfire evening. We ate the vegetable curries they cooked, enjoyed the beers they had hidden away and listened to them sing songs in hindi and rajistani to the beat of a water container/drum. It was a throughly enjoyable night and we both agreed that it was the best we had experienced so far in India.

To make the night even more special we slept under the stars. We could forget about 5 star hotels as we had our own million stars to sleep under. It has been a while since we saw stars properly, and they had a hypnotic effect, resulting in a good night’s sleep in the desert. 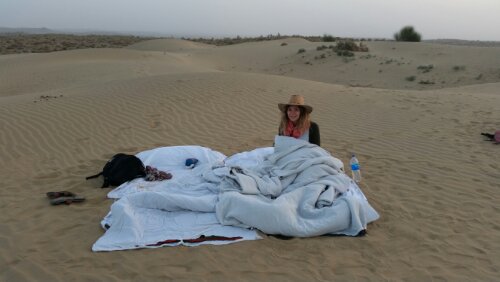 The next morning we woke up to the smell of breakfast and the sounds of the bells ringing from the camels necks as they prepared for another day of walking. 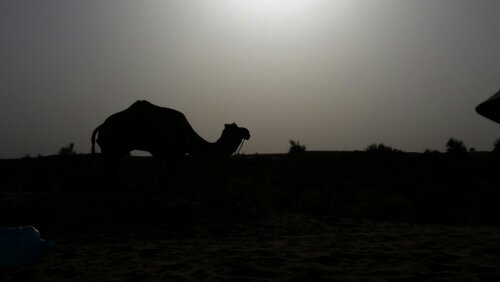 We set off before the heat became too unbearable and walked continuously for a long time. Within an hour or so the sun became very strong and we were reapplying sun cream, covering our heads or searching for drinking water. It was a great feeling to be in the heat, and I had no intention of complaining about it after the cold winter we’ve had. 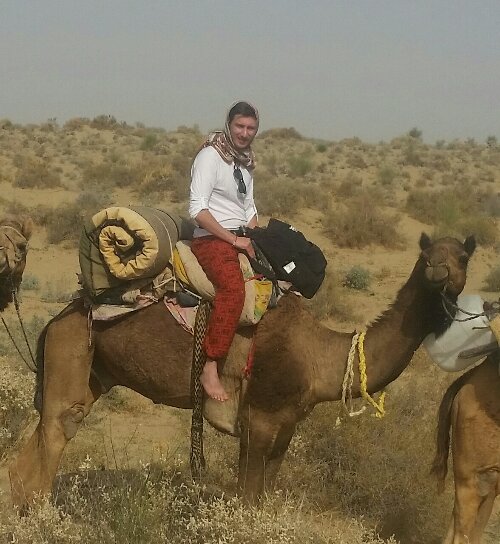 I wondered why the camels followed each other and the driver informed me that the camels will do anything as long as they are together. I liked that.

We trekked until our bottoms were sore and our camels ready for a rest. At which point we were ready to sit in come shade and wait for the jeep to take us back to the fort. 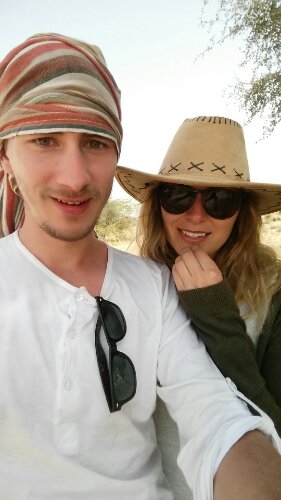 This was certainly highlight so far. India has so much to offer.