After our adventures in Sumatra we had decided to spend a week in Bali for some R&R. Nicki and I had never been on a holiday designed for relaxation together before and we were sure that it was going to test our ability to ‘do nothing’.

We arrived in Bali in the late evening and got our taxi towards Ubud, the area we decided to stay. In hindsight we would have been better off going with the heckling private taxi men than the official taxi service, since we feel we paid over the odds for the trip.

Ubud was our chosen destination on recommendation. There are several popular areas in Bali but Ubud, with its slightly hipster/hippy reputation, seemed to come with the most positive reviews.

We were holidaying in Bali during rainy season, and we did not see much of the sun during our week. This did not effect us too much in Ubud as it is not a coastal place and much of what to see did not require us to be outdoors.

We made a great effort to sleep in on our first day, reminding ourselves that we had nothing to be up for. But we were up in time to catch breakfast at a local restaurant, Habitat, which served the most amazing bowl of vegan food. I am a huge cynic of food stuffs such as chia seeds and have previously thought that the food market exploits people who have a desire to keep their body clean, but this bowl was a whole new world to me: coconut milk mixed with dragon fruit was mixed with kiwi, banana, museli and…chia seeds (I still don’t know what they do).

Feeling full of fruit we headed towards the Monkey Forest up the road to see a park full of monkeys. This was worth a visit and similar, if not as ethically comforting, to the sanctuary of monkeys I saw just outside of Kyoto in Japan. Instead these monkeys were an attraction for selfies. There were very entertaining episodes of people holding bananas and then getting a shock when they were pounced on by a monkey but Nicki still remembered the Orangutans, so she fearfully kept her distance from these primates. They bigger ones were quite scary actually. 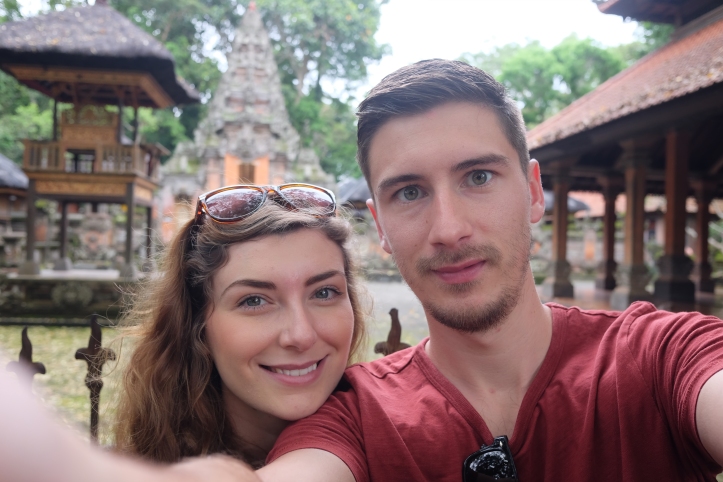 Our days were largely centred around food and Ubud is the perfect place to make food your primary focus. We ate at lots of wonderful restaurants at cheap prices (although paying in tens of thousands doesn’t make it seem inexpensive). Every lunch and dinner we ate somewhere different and we used TripAdvisor to seek out new and exciting dishes. Nicki tried her best to eat a vegan diet for the first few days, but she was too tempted with cake. It was a valiant effort.

One of my favourite places was a small non-profit restaurant, Fair Warung Bale, that donated any money made to healthcare. The food there was amazing and abundant. Anyone who visits Ubud should definitely eat there!

Aside from the food, there was yoga to be done. We visited the Yoga Barn in Udud and spent an afternoon in Yoga. I am the least flexible person but found comfort in the other men who were struggling to keep up with the bendy people. We were in a huge open wooden shack protected by a thatched roof and it was nice to do some yoga with the rain adding to the ambience. It was like doing yoga in a giant tree-house. The Yoga Barn was a great introduction to yoga and Nicki really enjoys it so she was in her element. 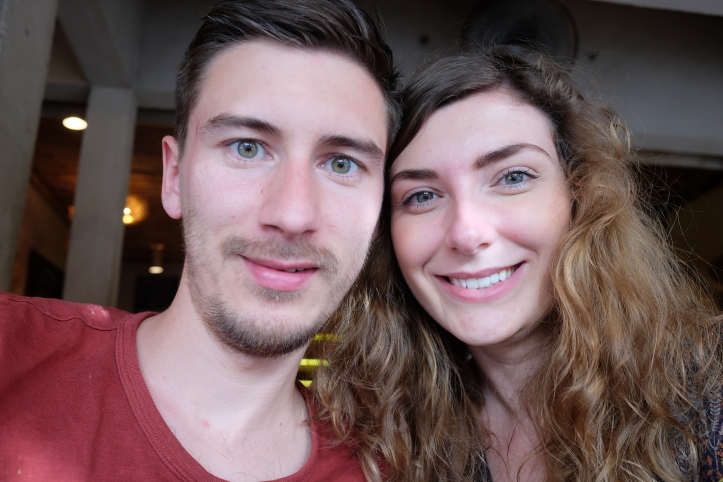 Despite this experience, I was finding it hard to warm to some of the people in the Yoga Barn café. There were lots of people eating raw food with fantastic postures but with an added aurora of superiority. I prefer pretentiousless hippies.

We were also fortunate enough to witness a traditional woman’s dance at the temple on Monkey Forest Road. The dancers seemed to dance with their eyes, which was as captivating as it was unnerving. 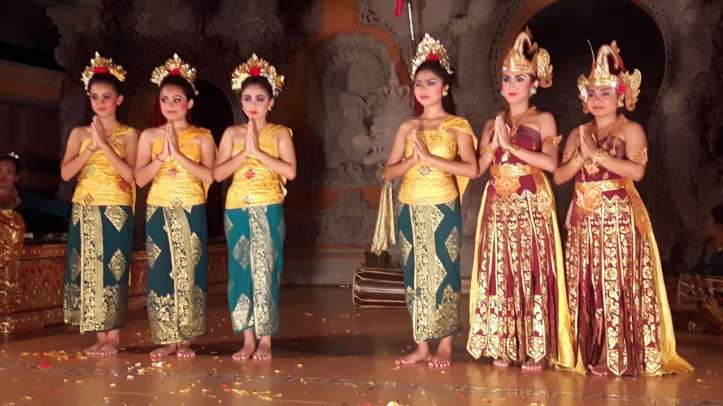 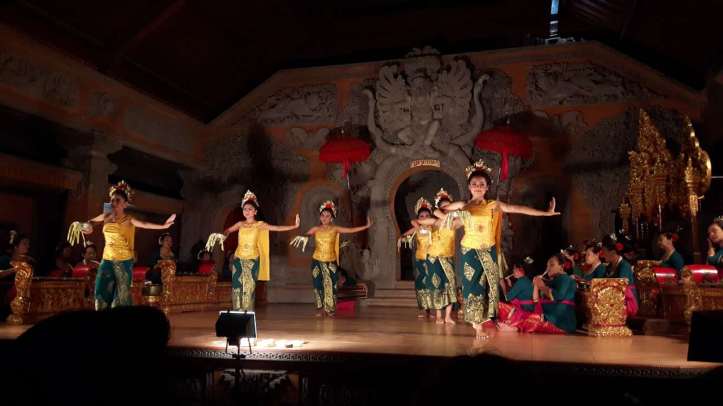 After a few days in Ubud we decided we needed to see what other parts of Bali had to offer. I was particularly intrigued by the place that seems to lure the most tourists: Kuta. I managed to persuade Nicki to visit the costal resort for the day, although it was clear she had her reservations.

Nicki’s instincts were completely justified when we arrived. Kuta was one of the most disappointing places I have ever been. In my eyes Bali has always been synonymous with beautiful beaches, wonderful food and positive vibes. However, our first experience of Kuta saw us stare stone-faced at the most disgusting beach littered with rubbish. We asked each other; surely this is not the right place?

We then walked around the town looking for places we were recommended by TripAdvisor. It appeared that Kuta was still sleeping from the previous night, since the only people we seemed to see were groups of Australian men in singlets or beer bellied Aussie couples. There were a few bars and restaurants open so we decided to pop in for some breakfast.

Upon eating a mediocre meal we were already missing the uniqueness of Ubud, with is character and identity. Kuta was not our kind of place. So much so that we returned on our 2-hour drive back to Ubud within a few hours, deciding to spend our afternoon and evening in a place we enjoyed rather than a place we were quickly growing to dislike.

We made it back to Ubud in time to enjoy the majority of the afternoon. We decided to visit a restaurant situated in the midst of the rice paddy fields a short walk beyond the city. Nicki claimed that the walk was reminiscent of Julia Robert’s experience in ‘Eat Pray Love’. However, we kept missing the hidden signs directing us towards the restaurant and ended up walking into the darkness, with only a phone torch preventing us from slipping into the paddy fields. And then, when we arrived we found the Sweet Orange Warung restaurant to be closing. We were lucky enough to return the following day, in the daylight and really enjoyed eating with a view over the rice fields. 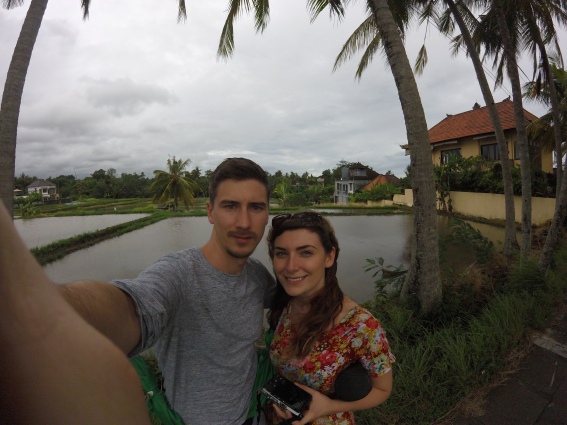 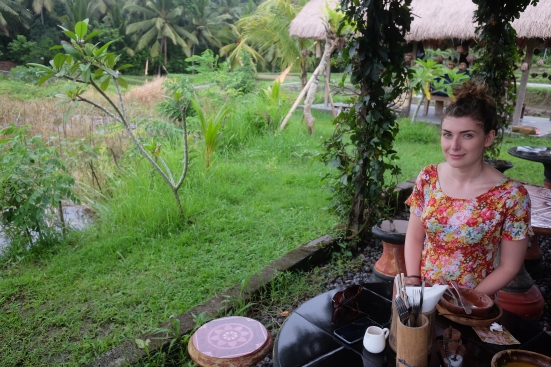 However, we then had to navigate our way back to the town in darkness and we took a route through the fields without another person in sight. My instincts were telling me that it wasn’t a good idea as we talked single file along a narrow boggy path in the dark. I was leading the way, and I was glad I was when I saw a large rat scurry across my path as I don’t think that was something Nicki wanted to see.

Our time in Bali was drawing to a close and the weather was picking up, meaning we could exploit the outdoor pool at our hotel (as well as a couple of indoor massages). There was one final thing we wanted to do before we went home, a cooking class. We had enjoyed the experience in Udaipur, India so thought we could add Indonesian cuisine to the list of things we will intend to, but never actually, cook at home.

This time we were part of a group of 24 people cooking all sorts of delicious dishes to eat ourselves. It was a really good experience and I am always amazed with what you can do with raw and fresh ingredients. I don’t think I am ever going to have the patience to be a good cook, but I enjoyed learning from the locals at Paon Cooking class. 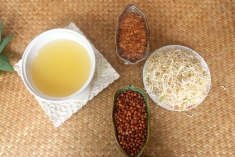 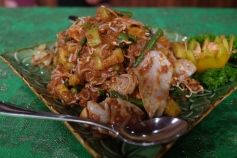 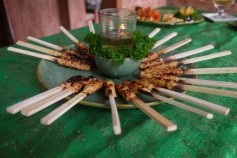 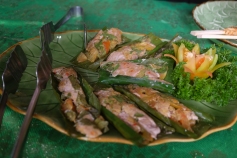 That was that. We were now ready to return to China for our final semester before the Summer. Our experience in Indonesia was an eye-opener: we realised that the beauty and diversity of Sumatra made it an amazing destination for travel, and that Ubud is a place you really need to embrace to fully appreciate it. Kuta, however, is somewhere I don’t think I will be returning to. Bali and Sumatra made for a trip to remember.