Having left the vibrancy of Istanbul we didn’t know what to expect from Turkey’s official capital city. I knew that it didn’t have the global appeal of Istanbul, but I didn’t expect it to be quite as uncharacteristic a capital city as I have ever experienced.

Our initial challenge was to purchase bus tickets from Istanbul. In order to do the we had to bargain with scores of bus companies in search for the cheapest deal. We gave ourselves lots of time and had fun scouring the different booths. It turned out that several companies liked to advertise for destinations that they didn’t go to. Neither of us saw much purpose in this, except frustrating themselves. We received a variety of reasons for buses being unable to take us to Ankara, the best being “Sorry, we are dead” (said with no hint of humour).

We eventually managed to get a ticket from a man who tried to set us both up with his young female colleague. It left an hour or so later so we had time for another Turkish tea.

The coach itself was relatively uneventful. We arrived in Ankara at about 6am and had time to book our onward travel arrangements, east towards Amasya.

It was then time to explore Turkey’s capital. We naturally asked a helpful bunch for directions to places of interest. They turned out to be the tourist information people (or so they said they were). When we asked one of the men responded “would you like a map?”, to which we nodded. His next response was “sorry, I don’t have a map”, leaving us both perplexed.

We eventually got into the eerily silent metro station. We questioned if any tube station in London, or even Istanbul, is ever empty at 8am on a Friday. The train hardly acquired any passengers before we got to the city centre. Here we spent a little time enjoying the fresh morning sun before heading towards a square for some much needed breakfast.

We put the quiet metro and empty streets down to the bank holiday weekend in light of the Eid celebrations, but it did not explain where all the people were. Nor did it explain the lack of attractive things to do in Ankara.

A man gave us advice on how to get to the mausoleum, but as this involved public transport we decided to walk it. Within an hour we had arrived at the shrine to Mustafa Kemal Ataturk, the man referred to as the Father of the Turks. The mausoleum was heavily guarded by armed officers and our hands were perfumed as we entered the park leading towards it. 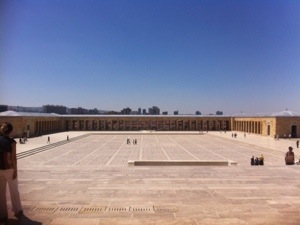 Initially there are statues resembling the men and women of modern Turkey. They are followed by numerous lion statues as we approached a central square. By this time the sun was baking and there was not a cloud in the sky. This meant the marble floor below us becoming incredibly bright, so bright that we had to squint to even see.

T
However, what we did see was something quite amazing. The mausoleum was a great structure which stood tall over the city below. Fletch even suggested that it outshines the Abraham Lincoln structure in Washington DC. I found myself staring at it in wonder.

We quickly found ourselves inside the great museum outlining the history of the Turks, the influence of Ataturk, and Turkey’s interesting view of their enemies in World War 1. It’s actually amazing how ignorant we were, and perhaps still are. We found ourselves blinded as we entered the marble square from the dark rooms within and took a few snaps before leaving the area.

After we left we walked for quite a few miles in an attempt to take advantage of the city. We walked around a stadium and a few streets as we continued to travel by our trusty feet within the cities we visit.

We stumbled upon a park where we intended to rest up for a while. We found a shady area to lie. Both of us found ourselves dozing off, until we eventually spent 2 and a half hours asleep. When we arose, the shady area that we fell asleep in was not so shady anymore. This showed that
the relentless pace of our trip was starting to catch up on us. Still, we don’t intend to sleep in a bed until we reach Georgia, such is our limited funds.

It was at this point that we realised where everyone in Ankara was during this long weekend: in this park! There were people everywhere and music blasting from a fun fair where lots of families were hanging out. In fact, people of all ages were here. We could see the draw of the park to people as it was actually quite beautiful. We decided to explore it but didn’t find ourselves queuing for the Ferris Wheel.

We managed to enjoy what remained of our day in Ankara by drinking tea and eating a small kebab. We also found time to visit the fair before getting the metro back to our bus station for night bus.

It may seem that we did not do much in Ankara, and in truth we didn’t. However, we are not sure there is much to do. It is certainly not what I think a capital should be like, and ‘Istanbul on Valium’ would be a compliment. Yet, I am glad we visited Ankara on our way through Turkey as I would always have wondered what it was like. Also, the mausoleum made the city worth visiting all by itself.

We were ready to move on from the cities and into the towns and mountains of Eastern Turkey.