Before embarking on our Tran-Siberian adventure we had a short stay in Mongolia, where we were able to see a vastly different way of life and alternative culture to the city life we have become accustomed to in China.

Beijing
On the Friday evening we finished our job in Ningbo, Zhejiang for the last time and decided not to rush straight into travel. Instead we had a day to rest and pack before flying to Beijing for our last dose of China.

Uncharacteristically, our flight was on time, which meant we had a full afternoon to explore Beijing for the last time. We took the metro from our hostel to the Summer Palace (somewhere I had never visited during my stays in Beijing). We were slightly underwhelmed by the Summer Palace as we got the feeling that many of the temples we have seen in China are more impressive.

We then decided to have one last visit to the eerie, yet majestic, Tiananmen Square, overlooked by the massive portrait of Chairman Mao pinned to the entrance of the Forbidden City. It was nice to see it one last time, satisfied with the knowledge that we are unlikely to ever see it again.

There was one meal that we were missing from our time in China: Peking duck in Peking. So we made it our mission to find one of the best: Bianyifang. We found the restaurant close to Tiananmen Square, which was strangely quiet given its online recommendation as one of the oldest duck restaurants in Beijing. We mistakenly ordered two whole ducks which was overruled as ‘too many’ by the waiter when he returned from the kitchen: he was right.

The duck we ordered eventually came and was cut up in front of us. One duck was enough to feed and satisfy both of us. This was our final meal in China, and one worth the wait.

Mongolia
The Trans-Siberian (or Trans-Mongolian) runs from Beijing to Ulaanbaatar and, had we not been cheats, this is where we would have started our journey overland. However, our employers offered us repatriation for air travel (not train travel) so we decided to use this to save ourselves time and money by flying into Mongolia. 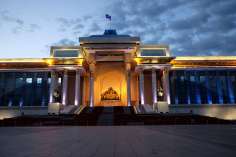 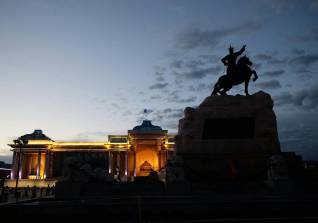 We arrived into Mongolia’s capital city with no real expectation of what we were going to see and do. We have come to realise one of the beauties of teaching abroad is the number of opportunities we have to travel. Had we been at home, a trip like this would probably have been planned months in advance but, aside from our train tickets and accommodation, we were going to make it up as we go along.

We spent our first afternoon wandering around Ulaanbaatar and familiarising ourselves with the country. Nicki and I both saw similarities between Reykjavik in Iceland and Ulaanbaatar. This was probably because of the blue skies and sparseness of people. It soon become evident that Mongolians love a beer since there are lots of pubs dotted around the city.

We were also to find out that Mongolians love something else more: Genghis Khan. This was evident from our arrival at Genghis Khan Airport, our hostel on Genghis Avenue, the first beer we drank was called Genghis, and the main square in the city features a massive sitting statue of Genghis Khan. We were to be reminded of this at several points during our stay.

For lunch, we visited a restaurant called ‘Luna Blanca’ for lunch, which could easily be confused as a Buddhist centre. Inside we had a delicious lunch of home made soup and filleted soy accompanied by a sea blackthorn juice (which we were told is native to Mongolia).

Some of our first impressions were not what we expected. For example, English is far more widely spoken than we thought it would be especially when compared to China. Secondly, the Mongolian hospitality is fantastic; everyone is happy, welcoming and helpful. This was very refreshing.

After a beer we went back to our hostel to enjoy Joanna Lumley’s documentary about her journey on the Trans-Siberian railway. As a consequence, we spent the next few days perfecting our Lumley impressions. Marvellous.

The following morning a lady picked us up from a tour company (Sunpath). We were going to spend the next 3 days in the company of an English Speaking guide named Boiler and a driver who didn’t speak at all.

We embarked upon a 5-hour, 400km, journey out of Ulaanbaatar and into the vastness of Mongolia’s wilderness. There are only 3 million people in Mongolia, yet it is 6 times the size of the UK. This makes for miles of greenery, fresh air, and wild horses. Boiler informed us that Mongolians do not see their livestock as property, but they let their horses, cows, sheep and goats roam freely until they need them for wool, milk, transport, or meat. In this respect, animals are not limited by space, but instead feed on natural grain and grass and live a wild but tamed life. Consequently, we were able to look out of the window (as well as nap) and our journey was not as gruelling as a 5-hour journey in a car may seem. 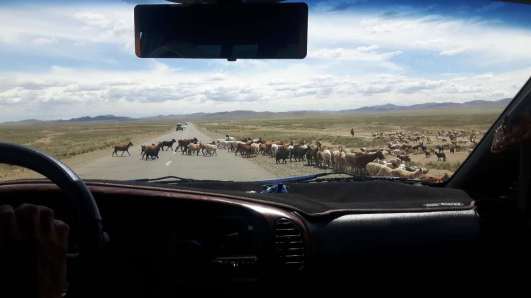 Eventually we arrived at Karakorum, the old capital and centre point of Mongolia’s historic empire. It was actually hard to imagine such a small area being such an influential place in world history. We were given a tour of the museum which helped us better understand the history of Mongolia and its empire as well as gaining more knowledge about the role of Genghis Khan and those that succeeded him.

Additionally, we were invited to play some traditional Mongolian games, including rolling animal ankles. 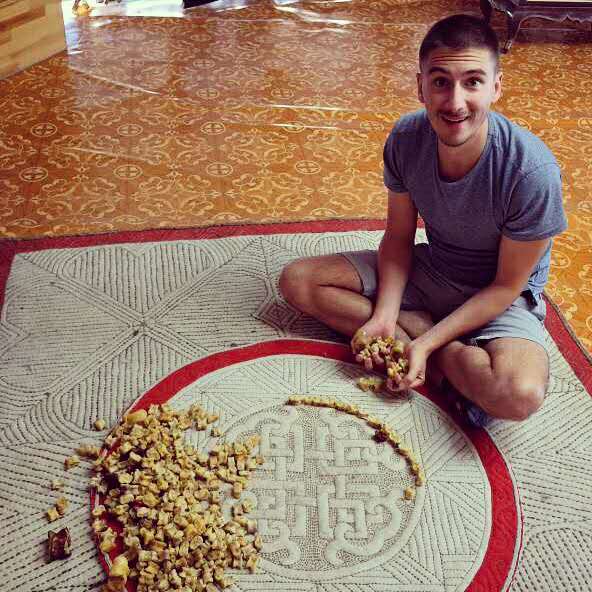 The following morning we were to be guided around the monastery that still dominates the area, but we now retreated to our accommodation for the evening. We stayed in a guesthouse a short walk from the monastery and we were pleasantly surprised to find ourselves sleeping in a Ger (traditional Mongolian accommodation). This was a great introduction to nomadic life and a surprisingly comfortable and spacious place to sleep. 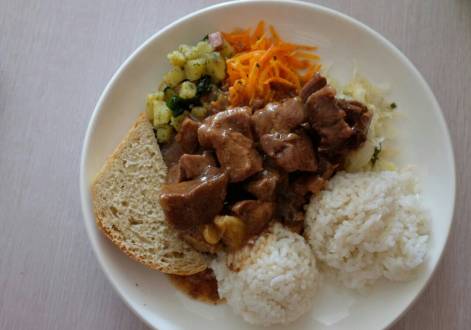 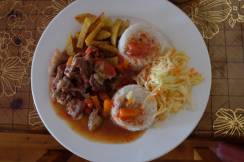 Our hosts provided us with dinner, which always seems to contain mutton, an, due to the number of tourists present, we were entertained by a band featuring an impressive traditional throat singer.

The following morning we had a walk around the monastery of Karakorum before having some more mutton and then driving towards the semi-Gobi where we rode camels. This seemed a little contrived since we had no purpose to ride the camels except the ride the camels. In India we needed to get somewhere so it was a little more special but we enjoyed it nonetheless. 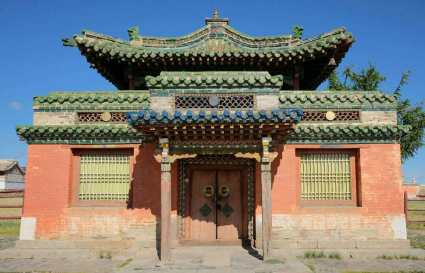 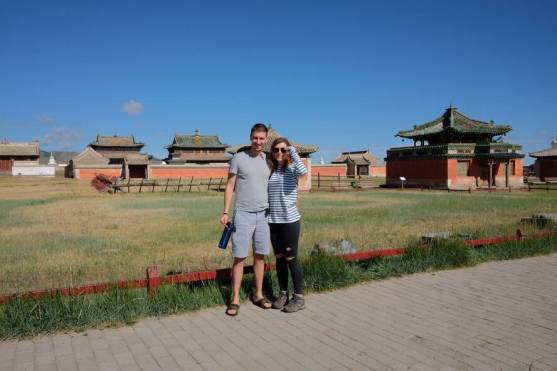 The final part of our day was what I was looking forward to the most; meeting and staying with a nomadic family.

We spent a few minutes off road to reach the Ger of our host family. The father invited us into his Ger to have a welcome smell of a strange jar and a drink of some fresh cow’s milk mixed with salt (Nicki struggled but stayed typically British in her politeness by drinking it all). 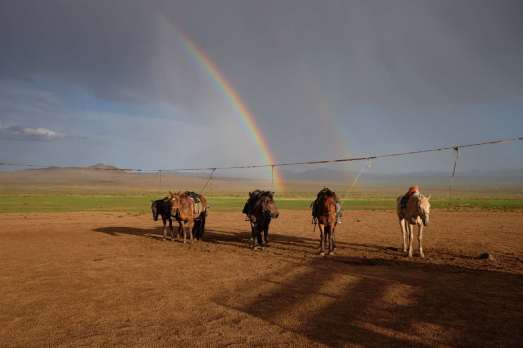 We were then left to our own devices until dinner. We tried our best to avoid the seven-year-old child of the family, since we had already seen him catch another person with a cowboy’s noose. We were not successful, however, because we were staying in his grandmother’s Ger and she had a secret stash of sweets hidden in the cupboard. He knew where it was. At one point in the evening we had a thunderstorm and the boy visited our Ger for some shelter, he brought a couple of frogs with him and left them behind when he left.

Dinner was cooked with hot stones. The stones were placed in the kiln and were then added to the water once piping hot. This immediately boiled the water and the mother chucked meat in with the stones to create a broth. It tasted delicious once it was ready.

Once the sun set around 10pm there was very little light and it resulted in an early but another very pleasant sleep in the Ger.

The next morning featured a short horse ride with the man of the family, before the final 3-hour journey back to Ulaanbaatar. 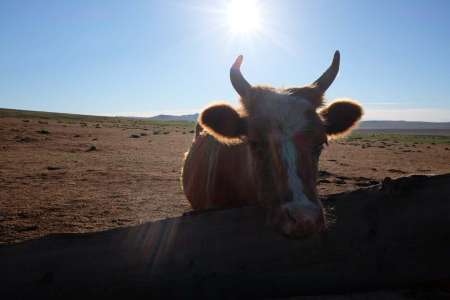 As we were not travelling onward until the next evening we had another day in Ulaanbaatar. We decided to use it to travel 50km beyond the city to a famous statue of Genghis Khan.

The information online about how to get there wasn’t conclusive so we decided to brave it with a taxi. The taxis in Mongolia are slightly odd in that they aren’t labelled. Instead you just stick out an arm and hope someone in any car will pick you up. A man pulled over almost immediately and drove the 90-minute journey to the statue, waited for 2 hours there, and then drove us back. He charged us about 20 pounds each for the privilege but we felt it was worth it.

The statue was magnificent in size and appearance. It dominates the surrounding landscape and makes Genghis Khan look imperious. Once inside the structure we climbed some stairs and excited through the groin of Genghis and onto the back of his horse. The most impressive feature of the statue was Genghis’ face. A Chinese man sneezed on us as we tried to take a picture. 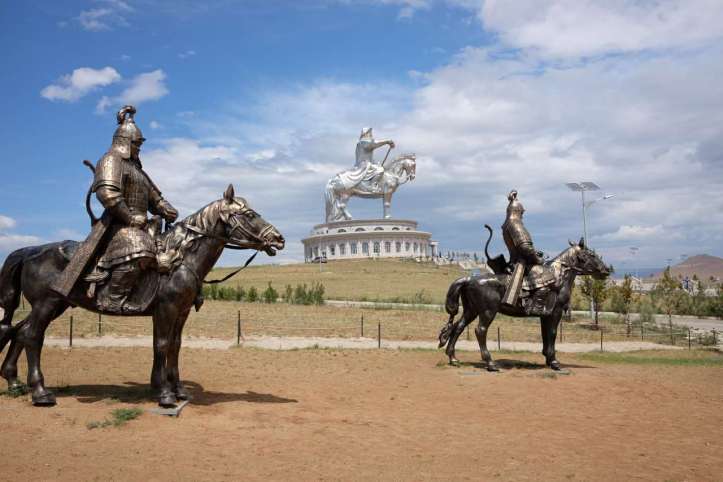 It was now time to stock up on food and beer before embarking on our Tran Siberian adventure bound for Moscow. However, the sale of alcohol was banned because it was Election Day. The shop assistant must have seen my desperation to take beer on the train as she offered to let me buy some if I agreed to take it wrapped in a black bin liner from the back of the shop as to avoid the cameras. This was Mongolian hospitality at its best.