For the best part of 2 years we have been living in China, and we take every opportunity to get out of our city and explore what China has to offer. However, I don’t often take the time to write about it here, and thought I would make this trip an exception.

Aside from providing an update of what we are up to, I also feel as though there is not enough information in English online about how to visit the Nanjing County tulous, and I wanted to share some of our experiences here. That said, the tulous offer a really unique insight into rural Chinese life, communal living, and alternative culture existing in China.

The Tulous (translated from Chinese as: Earth Buildings) are round houses made from natural resources. They are built up to 5 floors high and house up to 300 people. Some of them have housed the same families for over 25 generations. The houses are usually round in shape and feature a courtyard area in the centre. We were informed that the bottom floor usually features the kitchen areas so that water isn’t used in abundance on higher levels. It was amazing to imagine that someone could live their whole life in one circle, surrounded by the people they know and trust.

Despite this, we learnt that the clans who live in the tulous did so for more reasons than to simply live in close proximity to each other. Instead, rival clans used to fight a lot so the round houses were built as a form of defence from rival families. Today, it seems harmonious though.

Most of the tulous we visited were still inhabited by families who were more than welcoming to curious tourists like us. However, one must presume that many of the tulou inhabitants would have recently left their ancestral home in order to seek employment and wealth when the mass migration to the coastal cities began.

Anyway, our journey began from Ningbo and after researching our trip to the tulous we decided to book a train to Nanjing County, Fujian. Most of the information online points to travelling to the tulous from Xiamen (the nearest large city), but Nanjing is closer to the clusters and many trains stop there on the way to Xiamen from Shanghai etc. In fact, the train station itself is designed in the shape of a tulou.

Despite booking our tickets for the following Saturday we managed to charm the ticket inspector into letting us on our intended train with the promise that we didn’t mind standing up. In the end it turned out to be 6 hours of musical chairs as we prayed on empty seats. A flight to Xiamen would have taken us less than 2 hours, and a 3 hour bus from there would have taken us to the tulou clusters. But we decided to take the 6 hour train to take us directly and cut out the need to stay in Xiamen for the night.

Upon arrival in Nanjing, Fujian we realised that we were in the middle of nowhere. Unlike the busy city life on the East coast, there were no taxis or buses here. Instead there were touts offering us transport to the tulou clusters. We had previously booked a small hotel not far from the station (or so we thought). After a lengthy discussion with a driver we agreed to pay 220rmb our 45km drive to the hotel (as we arrived close to 10pm we took our chances on this being a good deal).

In the end we were very glad that we didn’t end up going to Xiamen instead though as we would have had to pay for a night in a hotel and missed the experience of arriving in YunShuiYao ancient town late in the night. We quickly noticed that the temperature had dropped significantly and we checked into our cheap hotel promptly to find it very cosy, modern and comfortable.

It is worth noting that there are two Unesco areas here. The first, Yun Shui Yao, requires 90rmb for tourists to enter. The second,  Tian Luo Keng requires 100rmb. People visiting may wish to select one or both of these locations depending on budget.

Websites recommended an 8:30 bus to the tulou clusters from Xiamen, requiring a change in Shuyang town. Yet, we found ourselves waking up right in the middle of it all. We were very lucky with the weather and went for a morning stroll through the narrow streets of the ancient town and out beside the glisteningly clean river. Here we had our first site of an ancient inhabited tulou, built on the bank of the river. We were invited in by a resident who offered us tea and allowed us to walk to the third floor to see the views from the top (she asked us for 5rmb for the privilege but we later found out we didn’t need to pay. We didn’t mind supporting her though). 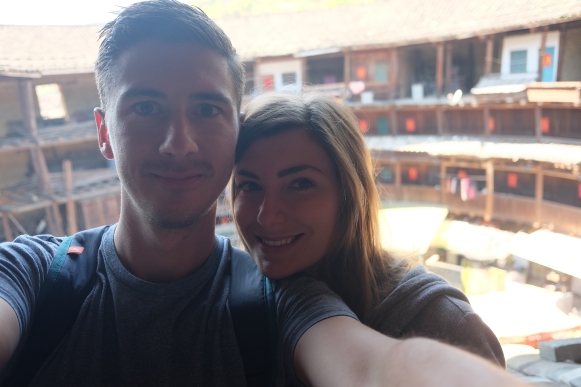 From there we had a short walk towards He Gui Lou, a rectangular tulou with over 200 years of history. Inside many of the residence appeared to have become cigarette makers and were keen for us to buy from them.

We spent the rest of the morning walking along the river of the ancient town, taking in the fresh rural air and enjoying the morning sun. We visited another larger Tulou named Huai Yuan Lou before having an inexpensive rice cake and noodle lunch beside a mill (which supposedly featured in a famous film). 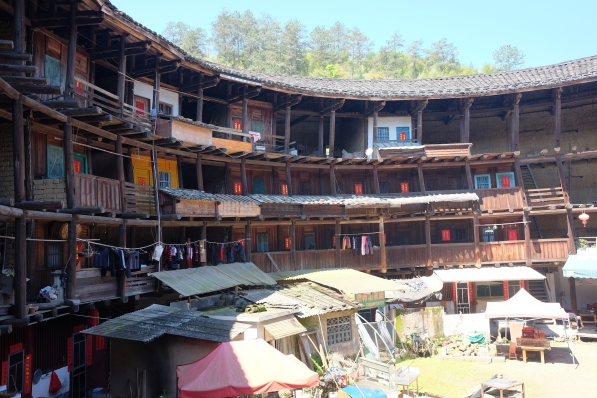 Our next step was to return to our previous hotel to pick up our luggage and make our way to Tian Lou Keng where we would be residing inside one of the ancient communal buildings. In order to get there from YunShuiYao we needed to catch the green public bus (number 6) to the tourist centre. You can catch the bus directly from the road on the opposite side of the river. The journey took about 15 minutes and cost 3rmb.

We were expecting scores of tourists at the tourist centre, particularly as we were visiting during Qing Ming (tomb sweeping) holiday. To our surprise there was hardly anyone in the centre and we had not seen a single foreigner up until this point. It is worth noting that there are no ATMs anywhere, and Alipay is currently used scarcely. We found this out the hard way.

Once we paid for the Unesco Heritage entry we waited to board a bus to the tulou cluster. We were again surprised to find that the bus needed 10 people to justify the journey and we had to wait for others to arrive. This would seem normal anywhere else, but we very rarely have to wait for people to fill up a bus in China.

The area is very well prepared for tourism, with dozens of buses waiting to take people. Yet, there were fewer than 10 people in total. We were not to complain about getting away from the crowds.

We told the driver that we would be staying in Ta Xia Village for the night, and we kindly offered us and the 8 other passengers a proposal. He suggested that, since there were so few people, he would take us to different tulou clusters and wait for us to return to the bus before moving on meaning he could ‘drop the two foreigners off’ at their village at the end of the trip. Everyone was happy with this convenient arrangement, especially as it meant transport for the day was sorted for 15rmb. 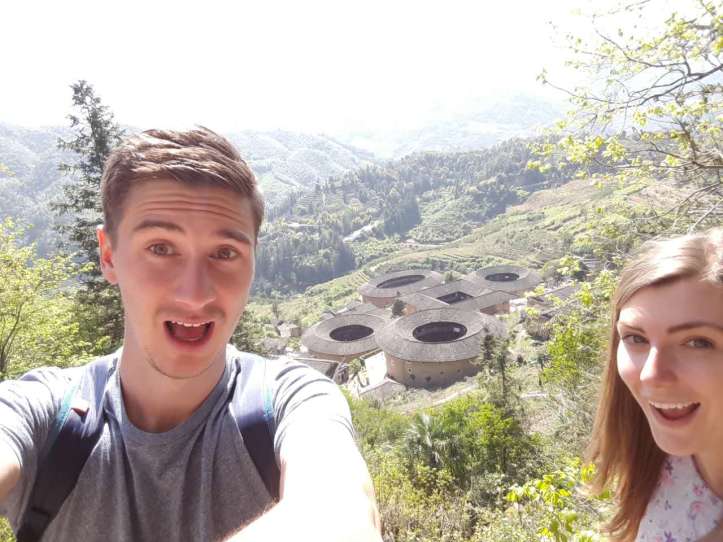 Our first visit was the most famous of them all, TianLuoKeng itself. This is the most famous cluster, and the image that you see most frequently on Google searches. This is mainly because it is magnificent. From above the cluster you can see the 5 earth buildings contributing to the community with the spectacular backdrop of the hills. This is known locally as ‘4 dishes, 1 soup’ due to its layout. It was this view that I had wanted to see when persuading Nicki to visit Fujian. It now appeared that we had been successful in our mission and it felt a lot like mission accomplished. 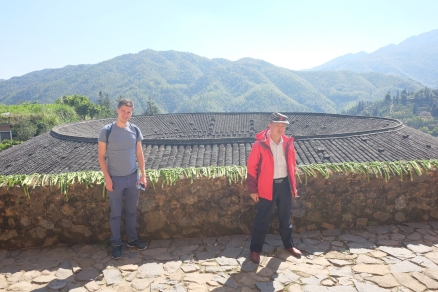 We then descended down the hill to visit inside the tulous and observe the structures from the outside. We both found it fascinating to consider that they were fully functional homes as it would be easy to think of them attractions instead. There were people drying flowers in the sun for tea, drying laundry on lines, and sitting around chatting. We were in a community.

After hoping back on the bus we made a short journey to Yu Chang Lou, which I believe is the tallest tulou with 5 levels.

Our final stop was our final one, Ta Xia Village. We found ourselves walking along the quaint town trying to find our accommodation. When we didn’t stumble across it by chance I asked a local, who offered to take us in his car instead of trusting us with his directions. It was that kind of hospitality which cemented our love for the area. 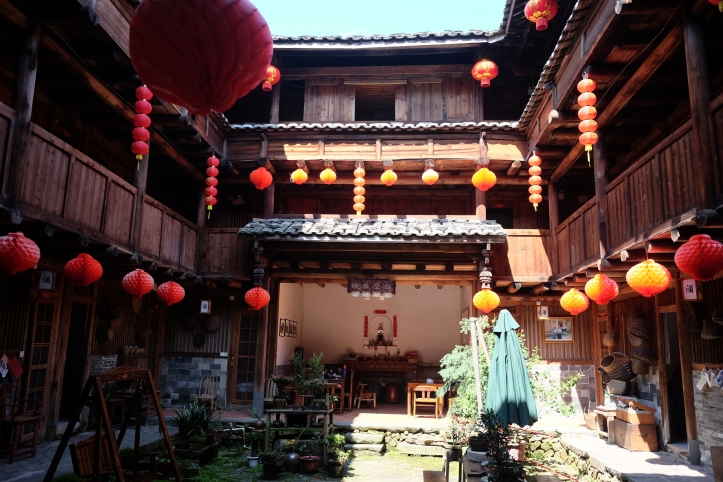 When we arrived at the accommodation we were not disappointed. We stayed at Nanjing QingDeLou Inn, which is a historic earth building converted into a very hospitable homestay for visitors. Its main selling point is that you get to spend the night in tulou-esque accommodation, in a room surrounding a nice courtyard. We were given a ground floor room, which meant we heard every creak from the movement above as the wooden structure had no noise or heat insulation. This may sound like a negative, but it is not. It really added to the authenticity of our stay. During the night the hosts allowed for guests to socialise in the middle of the courtyard, which is perhaps how social living should be. We woke up the next day satisfied with the knowledge that we had spent the night in an ancient tulou.

We spent the next day relaxing in our calm surroundings and did not leave Ta Xia village. We walked along the river in the morning towards De Yuan Yang, an ancestral monument towering above the village where spires representing ancestors stand proudly. 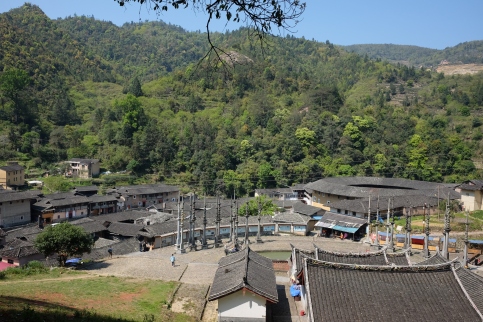 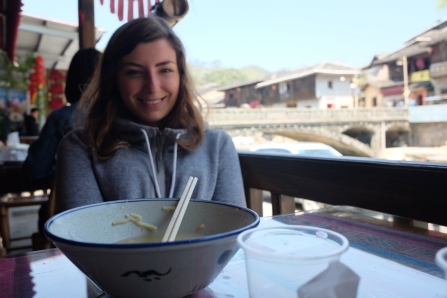 Reminding ourselves that we were on holiday, we took the time to relax in the afternoon, taking full advantage of the suntrap courtyard of our tulou, taking in the atmosphere of a riverside restaurant, and indulging in a few local beers.

It was then time for our final night in Fujian before the kind host offered to take us on the 90-minute journey back to Nanjing Station for 200rmb, rather than leaving the evening before (which would be required for a public bus).

So many things could have (and probably should have) gone wrong on this trip. However, with a bit of luck, kindness, and research we came away with one of our favourite memories from our time in China. I would not be surprised if tourism really took off in Nanjing County, but a little part of me hopes that it stays as unique and special as it is now.